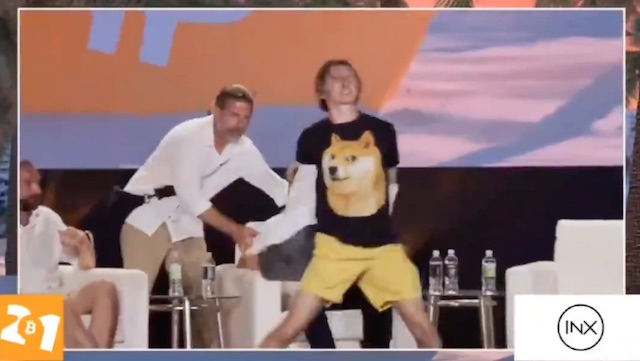 Everyone is talking about Bitcoin and cryptocurrency pretty much everywhere you go these days as there’s a lot of money to be made or lost depending on how you look at it, but I think it’s pretty much a given that most of the people involved with it all don’t really have a clue what any of it is actually all about.

This can quite clearly be seen in the following clips from the Miami Bitcoin Conference which is an event that looks even worse and more stupid than the name implies. The first one shows someone jumping up on stage during the middle of a presentation and starting to strip before exposing a dogecoin t-shirt, whilst the next one shows some Silicon Valley/tech entrepreneur type talking about Bitcoin and going off on a complete tangent, dropping in loads of different soundbites that don’t really add up or make any sense whatsoever.

If anything could sum up the Bitcoin craze, then these two clips are probably it:

Feels like you could fill an entire season of “Silicon Valley” with stuff just from the Bitcoin Miami conference. pic.twitter.com/ugmBsawJ6A

Lol. It’s like these people are almost caricatures of themselves at this point.

They all probably have made way more money than me from this cryptocurrency nonsense though which is a bit depressing. I guess they then choose to spend their time like this though so maybe it’s all swings and roundabouts?

For more of the same, check out this dark secret behind Bitcoin that should have us all worried. Seriously.