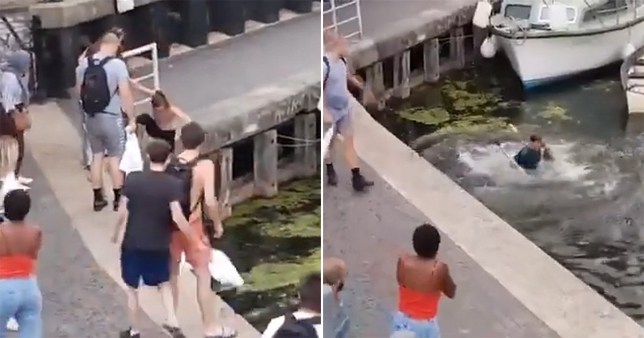 Police are looking for the kid who pushed the man into the canal.

What sort of sociopaths would torment a swan and then attack the only human with the decency to call them out?

That was (seemingly) the situation in London this past weekend as a group of youths congregated at the canal in Limehouse. A passerby sees one of the group lower herself into the canal and kick the swan, and walks up to give them a piece of his mind. One of the chavs then shoves the man into the water:

As per Metro, police are trying to identify the boy who pushed the man into the water and the girl who is seen on film kicking the swan. Superintendent Andy Cox from Metropolitan Police said:

Awful viewing. Animal cruelty is an indicator of many other vile behaviours and a tendency towards other forms of violence.

The assault & anti social behaviour needs our action. Help us by letting us know who these offenders are via 101 or confidentially via crimestoppers.

If anyone has further information on these individuals, please contact us on 0300 1234 999.

I’m seeing some comments online that the girl was actually trying to separate the swans because they were “fighting” (look more like they were mating to me), and the stick man actually waded in without thinking things through. Even so the kid who pushed him into the canal and runs off needs a good smack (metaphorically speaking of course). Amazed he hasn’t been identified already TBH, but I’m sure it won’t be long.

For the man who took a bunch of MDMA and stole a boat to go hang out with some swans, click HERE. No harm done.