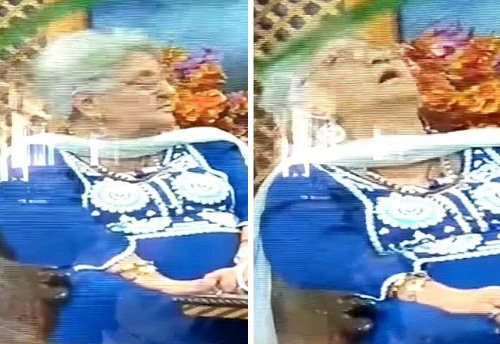 The dangers of filming anything live is that literally anything can happen during the broadcast and you can’t really do anything to stop it, but I don’t think that many people would have had to contend with someone dying halfway through the show.

This sadly happened a week or so ago though when 81 year old Rita Jitendra was appearing on Good Morning J & K over in India. She was talking to host Zahid Mukhtar whne she suddenly seemed to lose consciousness and her eyes rolled back into her head and she seemed to keel over.

The programme quickly went to footage of an old documentary from the archives whilst the staff rushed Jitendra to hospital. Unfortunately, she was pronounced dead on arrival with the cause of death apparently being choking.

You can watch footage of the incident below, but obviously it’s kinda upsetting, or just read Mukhtar’s account of what happened underneath that:

She was telling us a few interesting things about her life and was looking absolutely normal.

But suddenly she stopped talking and began having hiccups. We had to cut the interview [and switch to] a documentary to attend to her and take her to hospital.

Rita had a great association with television and her last words were on how she had started doing the dramas.

It’s shocking for us as this is the first incident in the Doordarshan history when any guest died in a live program.

As part of the TV profession, we managed to run the whole programme to keep the broadcast uninterrupted.

Well good on you there guys. Don’t pay her any respects or anything, just talk about how you guys managed to deal with someone dying on your tv show and not screw anything up instead. That’s what people really want to hear about, right?

Anyway, we’re gonna at least do something respectful and give Rita an RIP. Thoughts go out to her friends and family at these time. Props to those guys for keeping their TV show running too I guess.

For more death, check out the time an athlete died after jumping off a bridge on live TV too. Awful.