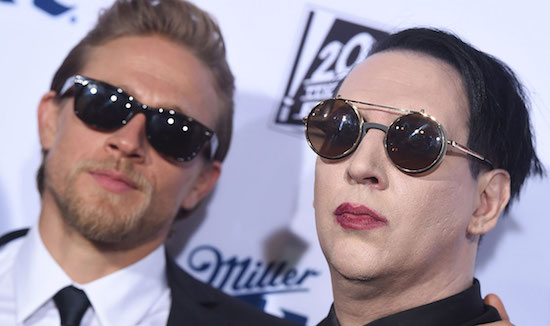 When you think of Hollywood actors and their friendship groups, it’s normally not that much of a stretch when you imagine people who are going to be best friends? I mean people like Ben Affleck/Matt Damon and Jake Gyllenhaal/Heath Ledger are obviously going to be buddies – they just look like they’re going to hang out with each other, just like the popular kids at school always gravitated towards each other.

That’s why it’s completely bizarre to discover that Charlie Hunnam and Marilyn Manson are best friends. The pair met on the set of Sons Of Anarchy when Manson guest starred for a few episodes at the start of the final season, and apparently really hit it off, so much so that they now hang out together all the time and cook food for each other?!

Completely bizarre but hey I’m all for it. The truth came out during the premiere of Hunnam’s new movie ‘King Arthur’ which his own girlfriend Morgana McNelis couldn’t be bothered to attend. No worries though – he just decided to bring Manson along for the ride instead:

What a couple of cuties. Almost kinda sounds like they’re really into each other – if you know what I mean – and who would be surprised by that in Hollywood, but maybe they are just having a great bromance?

Who knows? Either way it’s cool they can be so open about how much they like each other.

For more of the same (kinda), here are 5 couples that we all know and loathe. Except we don’t hate Charlie and Manson, they rule.