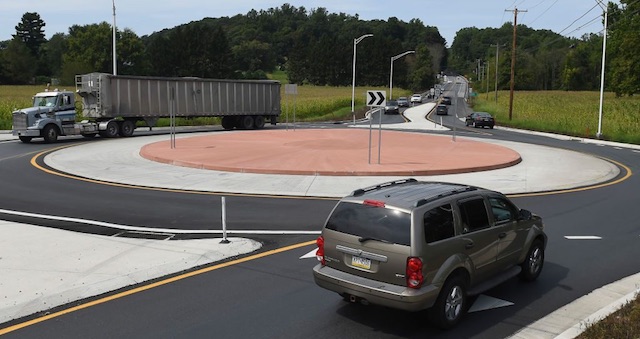 Not sure how many people know this, but there famously are hardly any roundabouts in the United States and the whole country’s road system is basically a bunch of straight lines and right angled turns because everything is so far away so it just makes more sense apparently. Or maybe they just didn’t know about them when they were designing roads, one or the other.

Anyway, even though roundabouts aren’t really part of the furniture over there like they are over here, the government over in Rowan County, Kentucky decided that it was a good idea to install one in the town of Morehead where Route 60 connects with Route 81. Apparently beforehand it was one of the most dangerous intersections in the state and the government thought that installing a roundabout would lower the danger level but it seems like the opposite is now true.

The locals were worried that becasuse the intersection was popular with people coming back from Cave Run Lake with large RVs and boat trailers that they wouldn’t be able to get around the roundabout effectively and the video below shows the chaos that ensued when someone tried to go round it recently with a boat:

They built a roundabout in eastern Kentucky and it’s not going so well 😂 pic.twitter.com/9WhTx9NaCl

Wow. I keep watching that video but I’m not really sure what even is going on? I think a whole bunch of the cars just go into the wrong lane and have absolutely no idea where they’re supposed to go afterwards and just kinda slow down and lose the plot. There’s definitely a lower than 50% success ratio though and if it wasn’t so funny watching that video I would be thinking about how serious the repercussions could be if these dumb Americans don’t figure out how to use a roundabout soon.

Fortunately, though the Kentucky Transportation Cabinet have decided to release a promotional video explaining how to use the roundabout, so there is that. Thanks goodness.

For more of the same, check out this speeding driver going absolutely flying after he hit a roundabout. Yeowch.