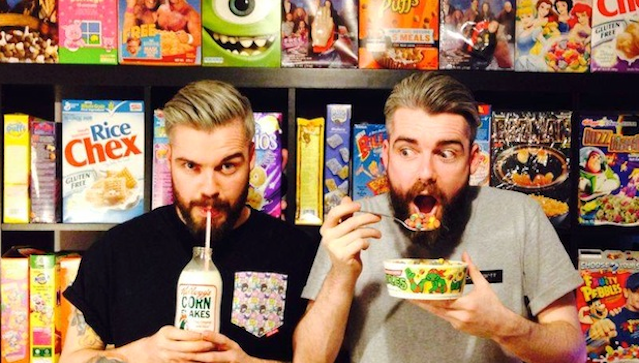 The presenter was asking him questions that he didn’t like about selling expensive cereal in one of the poorest boroughs in London.

If you live in London, or indeed anywhere in the country, then you’ve probably heard about this new cereal cafe that is opening up on Brick Lane and promises to sell quirky bowls of cereal to hipsters for a couple of months, before the hype subsides and it inevitably closes down because it really isn’t that good an idea.

It opened yesterday and Channel 4 went down there to check it out, where the owner – some Irish hipster guy called Gary Keely – shut down the interview halfway through because he didn’t like the questions that the presenter was asking him. To be fair the dude was bating him – asking him if he thought it was acceptable to sell £3 bowls of cereal in one of the poorest areas of London where around 50% of the children live in poverty – but I don’t think the guy should have reacted like that as it’s only going to make everyone think he’s a twat really. See what you think below.

Even though I’m not really down with the idea of a cereal cafe selling expensive bowls of cereal, the fact is that the guy has set up a cereal cafe in the perfect area of London for it and there are dozens of wacky pop up places selling slightly more expensive than usual food in the area, so it’s not really that fair of this presenter to single him out and pick on him because of it. I don’t really think he’s looking to appeal to children either and is looking more towards nostalgia loving hipsters as well so to bring up children doesn’t really make that much sense and was definitely only to get a cheap pop out of him. To be fair, it worked.

Still, even though he came across as a bit of a twat there’s no such thing as bad publicity so I’m sure a few people will be stopping off there this week. Good luck to the guy.

In case you’ve ever wondered as well, here’s what your choice of breakfast cereal says about you.