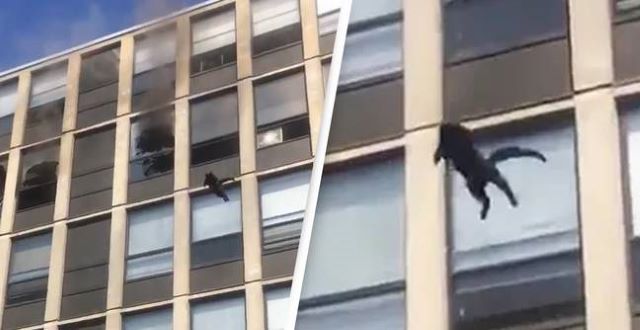 Say what you will about cats – there isn’t another animal on this planet that could leap off the fifth floor of a burning building and not only survive, but walk away in the most casual manner possible.

A cat over in Chicago did just that when escaping an apartment fire this week:

Nine lives for a cat that jumped from fire at 65th and Lowe. Cat hit grass bounced and walked away! pic.twitter.com/LRBsjMta2Z

Are you kitten me?! That is actually unbelievable. You just know this cat was sat around cool as you like just waiting for its owner to show up and rescue it from the flames. Then it realised no one was coming and just leapt out of a fifth floor window without a care in the world. Landed on all four paws too!

It went under my car and hid until she felt better after a couple of minutes and came out and tried to scale the wall to get back in.

In fact there were no injuries reported at all from the fire, so that’s good news. The cause of the fire hasn’t been determined either, which I guess makes the cat a suspect? Wouldn’t surprise me tbh.

For the Just Eat driver who stole a customer’s cat because his restaurant had a mice infestation, click HERE. Cheeky bugger.