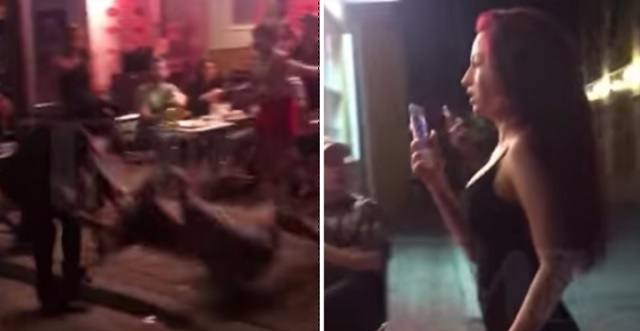 In a world that only really cares about memes and viral videos, the ‘cash me outside’ girl AKA Danielle Bregoli is perhaps one of the most unfortunate of recent times. However, that doesn’t mean that she’s showing signs of going away any time soon.

Bregoli and her friends were hanging out on the street outside a bar in LA the other day – this despite the fact she’s just 13-years-old – when she got into a slanging match with some hecklers. After a few insults were traded, one of her friends decided that she wasn’t having it anymore and off kicked a massive brawl, that for some reason led to a bunch of guys fighting each other as well. Weird behaviour:

Yeah, I’m not really sure what was going on in that video at all really, but I know it was pretty brutal when that girl grabbed the other one by the hair and started dragging her across the pavement. That is not what it’s about at all.

I do hope this is the last we see from the ‘cash me outside’ girl, but I highly doubt it given how much she’s cropping up recently all over the place. I reckon she’s gonna be a meme for a long, long time unfortunately. For more of her recent antics, click here. They just get dumber and dumber.