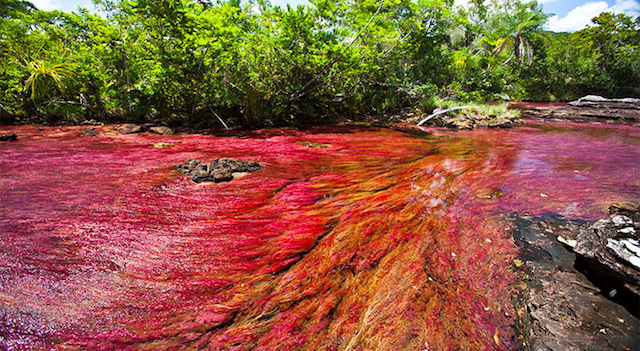 An unusual weed that grows on the bed of this river causes its water to turn red and possibly making it one of the most unique and beautiful rivers in the world.

Over in Colombia, there’s an amazing multicoloured river called the Cano Cristales that is yellow, green, blue and black at various points in its cycle. However, it’s mostly red and this is caused by the weeds at the bottom of the river which give the water its red sheen. The weeds are called macarenia clavigera.

However, the river isn’t like this all year round and for most of the year it just looks like a regular river with clear water and some green moss on rocks. Between the wet and dry seasons though, when the water level is just right the macarenia clavigera turns the river a dark red, as you can see in the pictures below and on the following page. This red is also offset by splotches of yellow and green sand, as well as blue water which gives the river its multicoloured effect.

Unfortunately, the river was off limits until 2009 due to guerilla activity in the area and fears over what unregulated tourist activity might do to the river. Now though the river has been re-opened to the public and there are several tourist agencies that will take you on a guided tour of it. Looks like it’s well worth going to see.