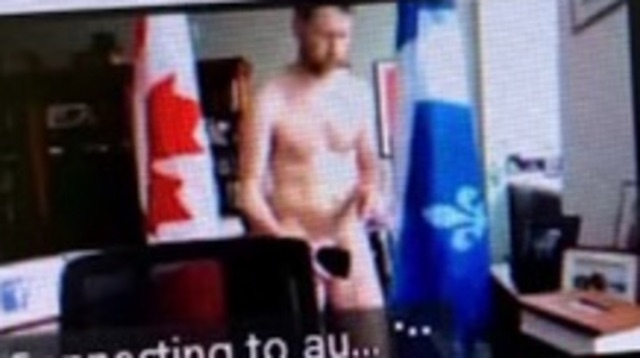 You would think that after a year of working from home that most people would be getting the hang of it by now but we’re still hearing about incidents like this one from Canadian MP William Amos, who was caught 100% naked on a Zoom call during a Parliamentary session.

Amos has served the Quebec district of Pontiac since 2015 and appeared to all of his House Of Commons colleagues completely in the buff yesterday, standing in between the Quebec and the Canadian flags. His dick was fortunately (unfortunately?) covered up with a mobile phone in the picture that was obtained by The Canadian Press, but it’s safe to say that everyone who tuned in probably saw a lot more than that.

Here’s a rather awkward telling off from another member of Parliament:

Lol. She’s a bit salty isn’t she? For what it’s worth, Amos issued the following grovelling apology, claiming that he was getting changed after he had been for a jog and accidentally left his camera on:

This was an unfortunate error.

My video was accidentally turned on as I was changing into my work clothes after going for a jog.

I sincerely apologise to my colleagues in the House of Commons for this unintentional distraction.

Obviously, it was an honest mistake and it won’t happen again.

Yeah, not sure if I’m buying that because it’s a bit scatty of the guy to not have a shower or anything after going from a jog and to change straight into his work clothes – even if he’s working from home surely the guy doesn’t want to be sitting around in a stinky shirt and tie all day, right? Whatever his reasons though, Amos is said to be mortified at what happened and will probably spend his entire political career trying to be known as someone other than the guy who appeared naked in front of Parliament on Zoom that one time. Good luck with that buddy and if you’re still working from home, remember to turn that camera off!