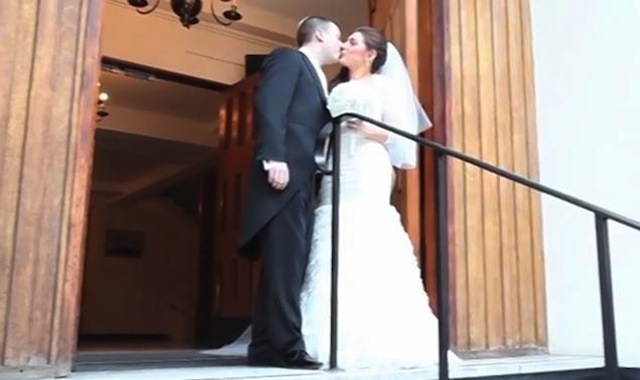 An anti-semitic cameraman sent out the wedding video footage he’d filmed for a Jewish couple and forgot to edit out his Jew-bashing commentary. Whoops.

London videographer Anthony Aurelius and his assistant were paid to record a Jewish wedding but left the new Mr. and Mrs. Stan and Claudia Gocman horrified to find that he’d been adding his own touch of commentary to the proceedings, which he’d forgotten to edit out. Among the things he’s recorded himself saying:

“Mental, Israeli dancing, isn’t it? There’s a real feeling of like, they’re better than everybody else.”

“I don’t think I blame Hitler,”

“Some of the Jewish women are very beautiful to look at, but I can tell you, they’d be right f**king cows. Very f**king snooty, they’d be a pain in the arse.”

Aurelius and his assistant, who also joins in the Jew-bashing, took nine months to send the footage to the bride and groom. The bride sent Aurelius an e-mail letting him know he’d been rumbled, and Aurelius responded by issuing the couple a full refund and wrote them a hand-written apology letter.

“I am very sorry for our stupid, childish conversation. I am also very sorry for offending you and possibly your family also,” he wrote. “You did not deserve this. I am ashamed, in honesty. I am trying to walk a good life, but in this instance I failed very badly in God’s eyes,” he added. “I need to grow up here it seems and pay more attention to developing my character.”