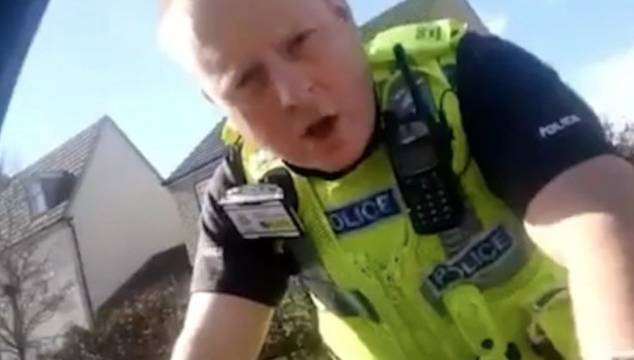 People say that honesty is the best policy, but probably not in the case of this Cambridgeshire police officer who pulled over this driver and then casually admitted that he stopped him because he’s a black male.

He did say ‘no offence’ though, you’ve gotta give him that:

The footage was actually taken 5 years ago in July 2015, but has only been shared by the driver now in the midst of Black Lives Matter protests around the globe. Cambridgeshire Police say they are ‘examining’ the video but did not receive any complaint at the time.

Asked why he didn’t report the incident at the time, the driver said (via Metro):

I didn’t report it, mainly because I was scared I guess because obviously, I felt like they were targeting me. I didn’t want any reprisals or repercussions or any more problems from them, really.

We’ve had the radio on at work, and that’s how I heard about what had happened in the United States. I thought now’s the time to get it out there and do something about it.

Lol… good thing he had the radio on at work otherwise he may never have heard about it.

Nick Dean, Chief Constable at Cambridgeshire Constabulary, released this statement in response to the video:

We are aware of a video circulating on social media involving a Cambridgeshire police officer.

I can understand why such a video clip would be concerning, especially with the current events surrounding the death of George Floyd.

With regards to this particular incident, I want to be clear that it was filmed in Ely more than five years ago and we do not believe that any formal complaint was ever received in relation to the officer’s actions. The circumstances surrounding this incident at the time are being examined.

I want to reassure you that I am committed to ensuring all officers and staff act with the upmost integrity and professionalism.

You could argue the police officer was just doing his job by stopping someone who fit the description of someone else, but saying the words “the reason I stopped you is because you’re a black male” (on camera no less!) is just so dumb it’s unbelievable. I don’t know why he thought it would be helpful to point that out. Will be interesting to see if there’s any action taken after the review of this footage is complete.

To watch a police officer punch and arrest a black business owner who had called to report a robbery at his store, click HERE.