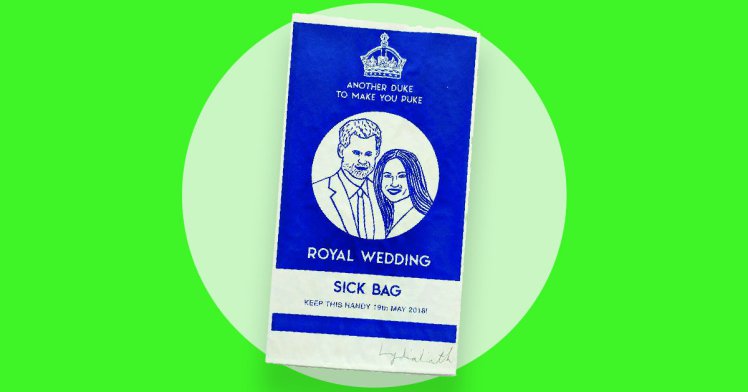 Surprised they aren’t already sold out.

The Royal Wedding is going down this weekend and it’s safe to say that most of the nation isn’t actually that bothered and sick of talking about it already, although there are definitely those pockets of patriotism that are anticipating it with fervent vigour.

Obviously Sick Chirpse falls firmly in the former camp, which is why we’re happy to bring you the best product that has ever been released in association with the event: The Official Royal Wedding Sick Bag. The concept is pretty obvious – you use it to puke up every time there is an instance of puke inducing sentimentality or soppyness and then I dunno, throw it at your mate when it’s all said and done and the FA Cup Final is set to start.

Here’s what the Baltic Shop website which is selling the puke bag had to say about it: 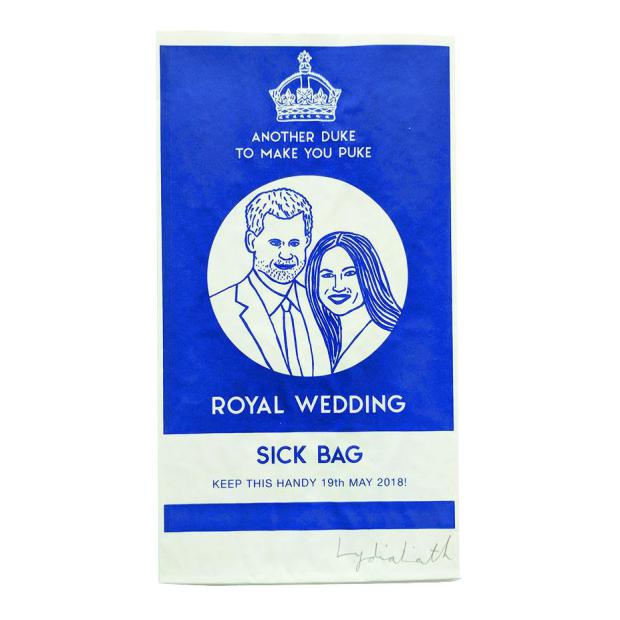 Ah, it only seems like seven short years ago that Kate & William tied the knot and now, about twelve kids later, the Royal family are gearing up for another significant wedding occasion.

Wills’ wilder little bro, Harry, has found his true love in the form of an American actress (of all things!), Meghan Markle, and there’s due to be a big wedding bash on the 19th May.

Which is good for them, all the best and all that but we, the people, better gird our loins for the next few weeks to be a frenzy of wedding related news, social media and full on Royalfest constant feed of information.

Luckily artist Lydia Leith has provided just the thing for when it all gets too much – a sick bag! And what a beautiful sick bag it is, featuring a picture of the happy couple and a date to commemorate the special day.

I mean it certainly sounds better than buying some kind of stupid plate or mug to commemorate the occasion. Whilst those are also practical and probably will have some future use out of them, there’s no way that almost all of the people that you make drinks for or serve food for on these items will think that you’re a complete and utter tool. At least with the puke bag you can try and salvage some level or ironic cool with it. It’s still pretty goddman lame sure, but in a sea of lameness and delirium over this royal wedding, it really is a beacon of sanity. Order it quick if you want to have one in time.

The sick bag also performs a double purpose too – pubs are opening at 7am on Saturday in order to celebrate, so those who are planning on overindulging might actually need to use it. Good luck.