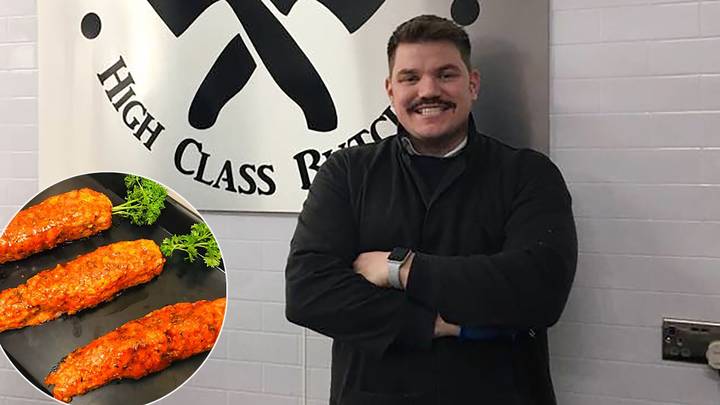 More and more people have been converting to veganims over the past few years that you kinda get the feeling that vegans aren’t the source of annoyance and derision that they traditionally have been in the past, but then you still get guys like the man in this article who has nothing better to do than spend loads of time and effort taking the piss out of them.

Butcher Tom Samways has revealed that he was so annoyed by vegans calling food substitutes vegan chicken or vegan ham etc that he decided to make a meat version of a vegan food. That’s how he came up with the pork carrots that you can see in this article, but they became so popular that he’s made them a staple at his butcher shop in T Samways High Class Butchers in Cardigan, West Wales.

Here’s what he had to say about his invention: 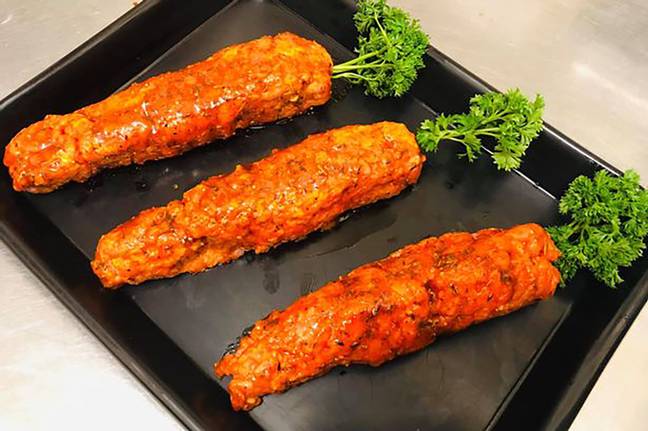 Everyone loved them. It started out as a bit of a joke, they were just a gimmick – but they have gone down well and we’ll be making more.

The idea came from the fact that a lot of vegan food is named after meat products, like vegan sausages and vegan chicken.

They’re just pork kebabs really. They’re made from high-quality minced pork meat and are glazed with an Italian herb dressing to get that orange look. Then they’re finished off with a bit of parsley.

I have had a lot of backlash over it, including some not very nice comments. But at the end of the day it’s just a joke.

I don’t know if veganism is a fad or not, but I haven’t noticed a drop in sales.

At first I was a bit concerned, especially during Veganuary, but if anything I’ve seen an increase in sales. We’re definitely up every month.

I think it’s because people are a lot more aware of where their food comes from now. A lot of customers come in wanting high-class meat from a Welsh farm. They don’t want to get it from a supermarket anymore.

I don’t have anything against vegans or businesses that change their products to suit demand – you have to do what works for you. But people who come to my butchers are meat-eaters.

Kinda sounds like he does have something against vegans doesn’t it and it’s probably fair enough really because they’re directly threatening his livelihood – if they had their way than his butcher store would be closed down for good. Not really sure what good it’s doing to troll them by making these pork carrots though, although they do look pretty nice and it seems like they’ve made him a bit of cash too. He reckons that he sold 300 in one day once!

For more of the same, check out these vegans barbecuing a dog in the street to try and get people to stop eating animals. Good luck with that.