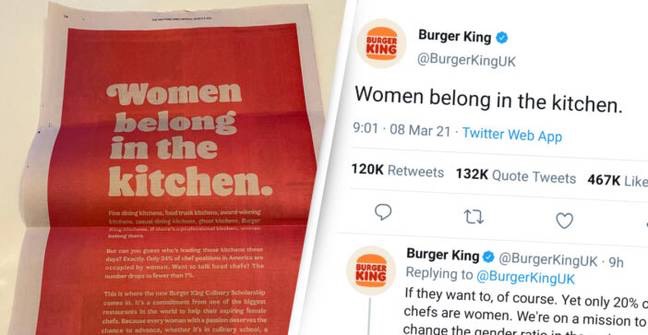 Whilst Meghan Markle is understandably dominating the conversation at the moment, you have to at least give props to Burger King yesterday for trying to get involved by putting out a tone deaf tweet about how women belong in the kitchen on International Women’s Day – even if the intention was to promote their bizarre culinary scholarships, it was always clear that the initial tweet would get way more traction than the follow up.

Anyway, the story gets even worse as not only did Burger King UK post this tweet, but the fast food chain also took out a full page ad in the New York Times yesterday promoting their silly little scholarship saying exactly the same thing. Get a load of this: 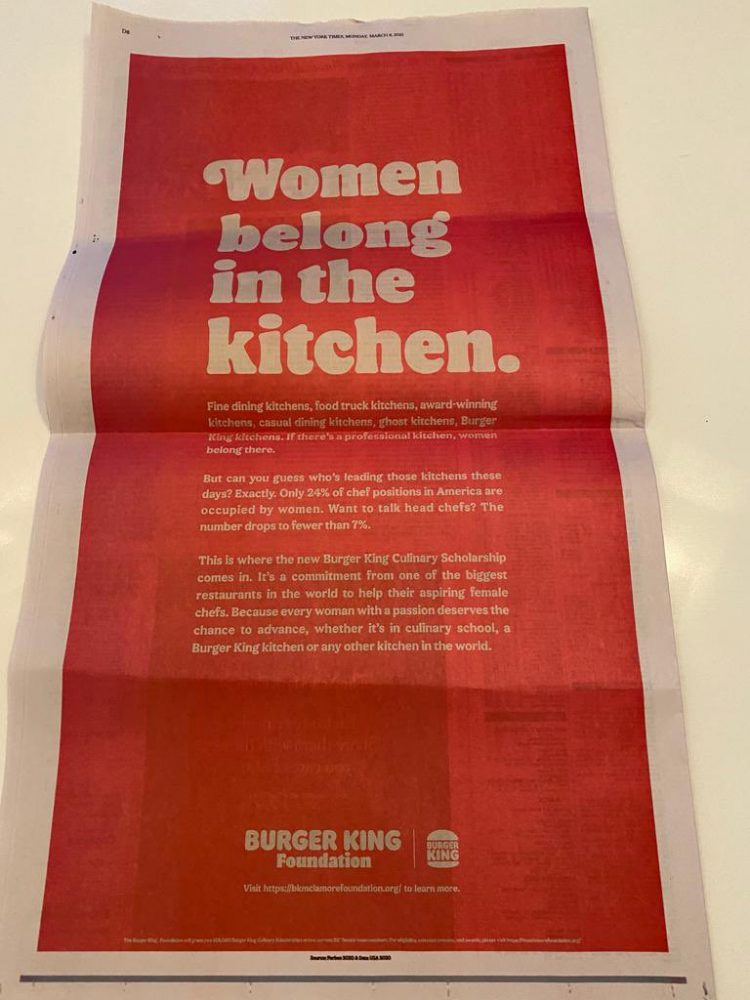 But can you guess who’s leading those kitchens these days? Exactly. Only 24% of chef positions in America are occupied by women. Want to talk head chefs? The number drops to fewer than 7%.

Ooft. Again I get what they’re trying to do by grabbing your attention with an outrageous headline and then going on to promote whatever in the small print, but it’s absolutely insane to me that this was greenlit as an international campaign and that nobody who was working on it – including the women probably – thought that they were going to get brutally rinsed for saying something like that. Unless presumably all the women just got shouted down and talked over.

Anyway, taking out that amount of ad space in The New York Times costs at least $65,000 so that’s the minimum they could have spent on this campaign. As it was international then I imagine they spent a whole lot more on the creative and coming up with those five words that have been a massive own goal. Guess their agency is getting fired.

The Burger King UK account even issued the following grovelling apology late last night and deleted their original tweet, suggesting that they really have screwed it up this time. Oh well.

We decided to delete the original tweet after our apology. It was brought to our attention that there were abusive comments in the thread and we don’t want to leave the space open for that.

For more of the same, check out this angry man slapping a Burger King employee. Probably what everyone wanted to do yesterday.