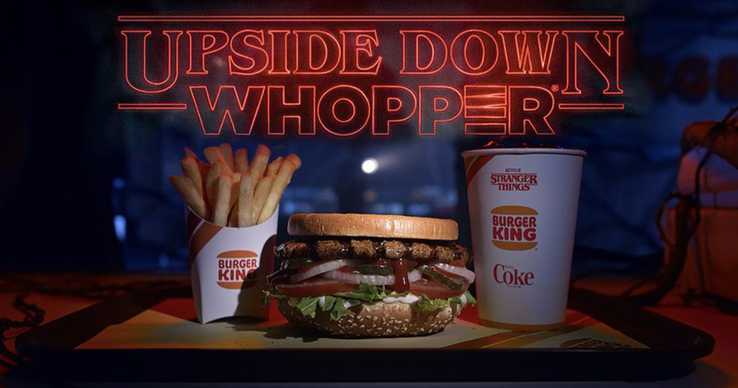 Welcome to the Upside Down.

It’s been almost two years since we last saw a new episode of Stranger Things are our screens, but the wait for Season 3 is almost over and a whole bunch of brands are pulling out all the stops to celebrate its return.

No doubt the dumbest of these though is this promotion from Burger King, who are proudly releasing the Upside Down Whopper in collaboration with the new series. This is exactly what it sounds like – a Whopper that’s served to you upside down – but it will also come with a bunch in 80s style packaging that’s kind cool. Even the logos are old school Burger King logos, as well as limited edition ketchup packets. Nice.

Unfortunately, like so many of these offers the Upside Down Whopper will only be available in the US at the following locations: Miami, Houston, Boston, Atlanta, Dallas, Philadelphia, Chicago, San Francisco, New York and Los Angeles, but if you’re feeling left out then you could always do what Stranger Things superfan Rhys Lightning recommends:

I couldn’t believe that the UK was going to miss out on the Upside Down Whopper, so I came up with a solution: just turn the Whopper upside down yourself.

I can’t wait for the new series, I’m hoping that Hopper and Joyce get back together. They’re such a cute couple.

I mean yeah Rhys has really hit it on the head there – most of the Whoppers you pick up from Burger King will have been chucked into your bag and probably served to you upside down anyway, so I’m not even really sure what’s that special about just ordering one so that it’s meant to be served to you this way. Will probably come the right way up knowing most Burger King workers anyway. Not fully convinced about this one.

For more of the same, check out this new trailer for the third season that was released a couple of weeks ago. Gonna be good.