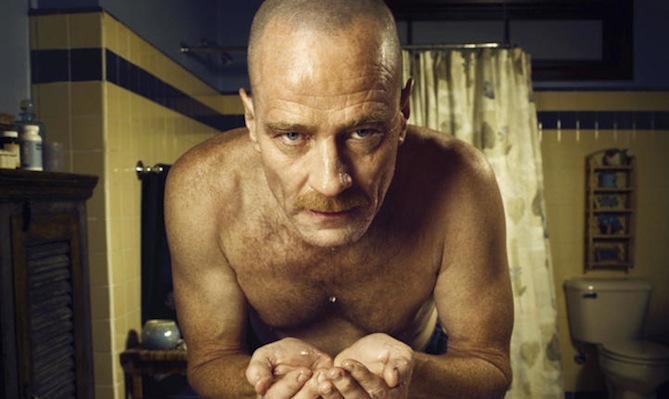 No wonder Bryan Cranston is so good at playing a dangerous sociopath – he once dreamed of killing his ex girlfriend.

The awesome Bryan Cranston aka Walter White recently spoke to GQ magazine about the time he had a brush with the kind of brutality we’re more used to seeing from his on-screen character. When asked if he believed in evil, Cranston said “Yeah, I think it’s right next to good, inside every person”, before giving an example of a falling out with an ex girlfriend. “I had one girlfriend I wanted to kill”, he said. She had left him messages on his answering machine saying “I’m gonna kill you. I’m gonna cut your balls off. I’m gonna have your dick sawed off”. Finally, one day she showed up banging on his door and Cranston had enough: “I envisioned myself killing her. It was so clear. My apartment had a brick wall on one side, and I envisioned opening the door, grabbing her by the hair, dragging her inside, and shoving her head into that brick wall until brain matter was dripping down the sides of it.”

â˜› Next: What If Breaking Bad Was A Sitcom?

“Then I shuddered and realized how clearly I saw that happening”, he concluded. “And I called the police because I was so afraid. I was temporarily insane — capable of doing tremendous damage to her and to myself.”

No wonder he’s so good at playing a mentally unhinged meth dealer. He’s off his rocker in real life too. Granted, we’ve all had terrible thoughts about our exes. Not many men would be best pleased to find messages on their answering machines threatening to cut their dicks off. Doesn’t exactly scream picnics and rainbows does it?

I’m surprised he didn’t think of putting a little Ricin in her food, or dissolving her body in a bath tub. Those ideas have to come from somewhere.