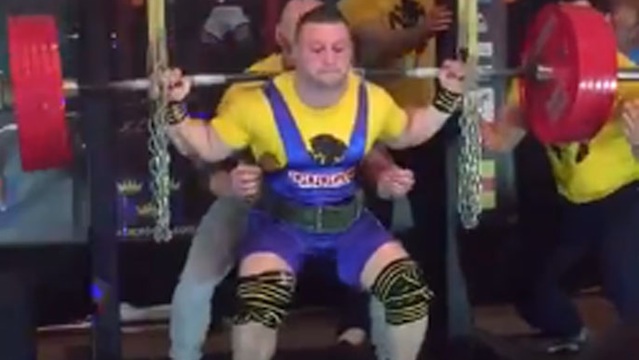 This is a one way ticket to snap city.

Weightlifting can be a dangerous sport if you don’t know your limits, as Irish powerlifter Tommy Dolan found out to his dismay recently.

It was his first of three lifts at the Irish Powerlifting Organisation (IPO) National Championship and he was attempting to squat 280kg, which is roughly 617 lbs if you prefer to work in that system. To put that in perspective for people that don’t know anything about weightlifting, that’s roughly three times his own bodyweight and there’s absolutely no way that he has any right at all to be lifting that much, no matter how stacked he is.

And yeah, he got absolutely found out in this video as his legs start to wobble and then completely buckle, ripping the quad straight off the bone with a sickening crack sound. Ouch. I suppose if it’s any conflation at least he didn’t nearly kill himself weightlifting like this guy, I doubt it is when he won’t be able to walk for about six months though.

This really is one of those videos you have to watch with your hands over your eyes because you just know when it drops it’s going to be really, really nasty. And it doesn’t disappoint.