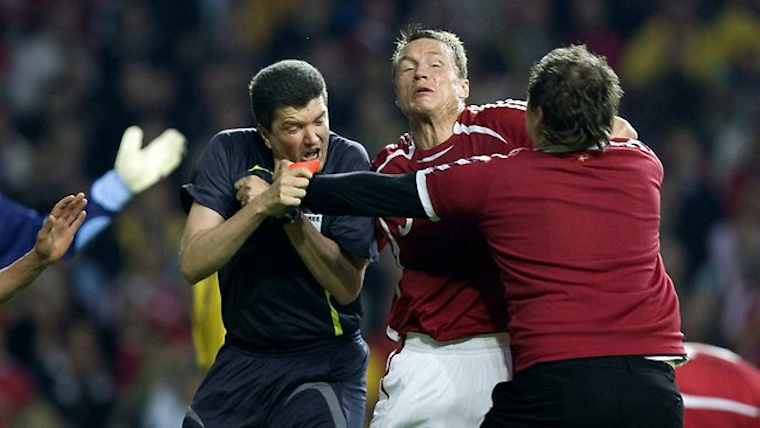 There have been some questionable decisions made in the Premier League recently (hello Mark Clattenburg) but imagine if one of the teams reacted like this and kicked the absolute crap out of the referee for sending a player off. It can only be Argentina.

First up the picture has nothing to do with the story again, but it was the best one I could find to illustrate it that wasn’t some shitty screen grab. This is pretty shocking but also pretty great and continues the theme of unnecessary violence in football matches in South America that seems to be becoming more and more prevalent on Sick Chirpse as our legacy continues. This time we’re heading over to a lower league Argentinian match for a brutal assault by a team on a referee. It might even be an amateur match rather than a lower league match, but it seems kind of weird that anyone would be filming an amateur match. Still, stranger things have happened I guess, like someone filming the 5th division Belgian basketball league where this monumental sporting fail occurred.

Anyway, back to this and the guy involved is actually the brother of Boca Juniors superstar central defender Rolando Schiavi. I hadn’t heard of him either, but when I went to the Bonbonera in March he got a pretty massive cheer when his name was read out in comparison with all the other players except for Riquelme obviously. The Boca fans weren’t cheering for him at the end of the match when he slipped  in the last minute of the game and let in the Independiente attacker who scored to win the match 5-4 for them though, no way.

Rolando’s brother is called Leandro Schiavi and plays for some shitty team with an awesome name called Hurricane Arribenos over in Argentina who were facing the equally awesomely named Jorge Newbery (that’s the name of a team, not a player) over the weekend when the red mist descended over Schiavi and the rest of his teammates. It all kicked off when the referee went over to check on a Jorge Newbery player who was lying injured on the ground. A few seconds later, Schiavi (wearing green 2 in the video) runs over and starts trying to drag the Newbery player to his feet, obviously thinking that he is feigning injury.

In about one second players from both teams start brawling over this issue. This is an OK brawl, but nothing special, it’s just we’ve seen it all before kinda shit. Schiavi got sent off following this and that’s when shit really gets dark. The Hurricane players are obviously not happy with this decision but instead of protesting it or anything they all just instantly attack the referee, kinda like it was thought up before they even started playing the match. And it’s a pretty savage beating, with the Hurricane number 5 banging the referee in the back of his head with his fists like a coward. The worst comes from Leandro Schiavi who kicks the referee square in the face after he’s fallen to the floor. You know that’s gotta hurt. I didn’t spot that in the first run through so make sure you watch the replay of it where it’s really highlighted. It’s nuts.