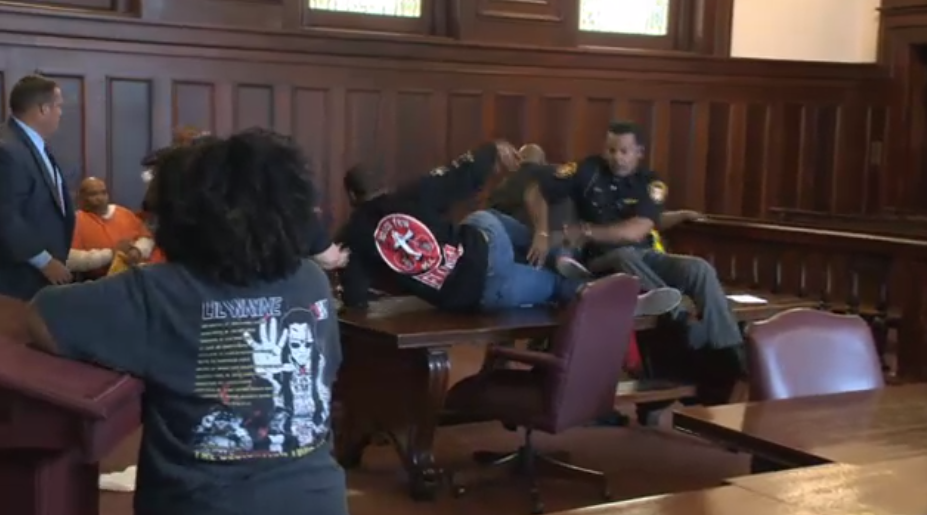 It must be really tough sitting in a court room and being expected to behave yourself as the person who murdered your mum is standing right there in front of you, still breathing oxygen after taking your loved one away from you.

For these two brothers over in Youngstown, Ohio, the opportunity to get their hands on the man who killed their mum was one they couldn’t pass up:

23-year-old Jerome Stewart and 30-year-old Antony Dees were both booked on charges of assault, obstructing official business, and contempt of court. So that sucks, but at least they managed to get a few good licks in.

Really don’t blame them considering the sort of man that was across them. VIA:

The men were arrested in the courtroom of Judge Maureen Sweeney after attacking 62-year-old Dale Williams Sr., who was being sentenced for the June 15, 2017 shooting death of the men’s mother, 46-year-old Elizabeth Pledger-Stewart.

Police say Williams rammed his van into a vehicle being driven by Pledger-Stewart on Market Street in Youngstown, then shot her several times.

Imagine someone ramming into your mum’s car and then casually walking up and shooting her to death. Of course you’re going to jump that guy and kick his head in, even if it means winding up back in court yourself.

P.S. Big up the cops who were clearly not putting 100% into restraining the two brothers. They wanted to see that guy get beat up just as badly as everyone else did.

To watch a child killer get brutally decked by the grieving uncle of the kid he murdered, click HERE.