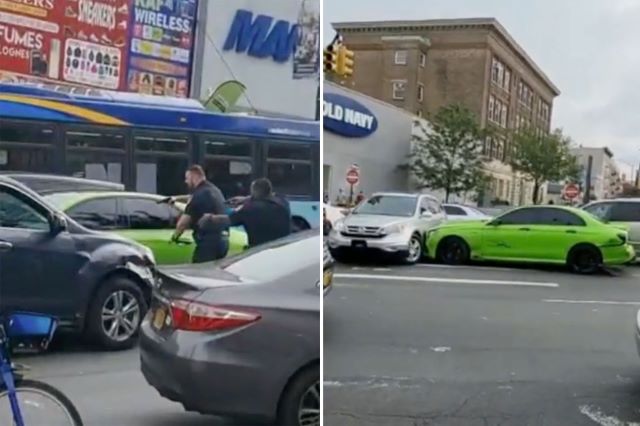 Absolutely wild video out of Fordham Road in the Bronx this week as some idiot in a green Mercedes went full-on GTA mode while trying to flee from police, hitting seven cars and injuring at least 14 people in the process.

As per the NY Post, cops tried to stop the vehicle for excessive tints and the smell of marijuana, but I guess the driver had something else to hide and was willing to do whatever it took to get out of there:

Madness. No one drives like that unless they’re in full “I’d rather die than go to jail” mode. The craziest part is that no one has been arrested yet, even though you’d think a heavily-dented lime green Mercedes with tints that they (presumably) took the number plate of wouldn’t be too hard to track down. Although if the owner of that thing is smart he’s probably torched the car or dumped it in a river somewhere.

Pretty shocking they didn’t start shooting at him too, considering all the lives he was putting at risk and the fact this did take place in America. At least shoot the tyres or something? I don’t know. Hopefully they track this guy down too because he’s clearly a danger to everybody around him.

For a look at the laziest/funniest police chase of all time, click HERE. We’re all allowed an off day, right?