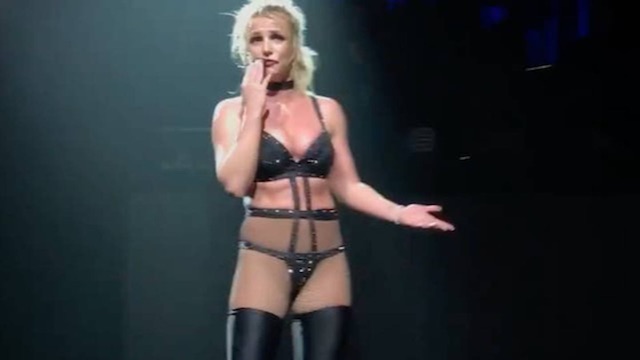 This takes on a whole new meaning.

Everyone is pretty much reeling from Britney Spears’ admission yesterday that she’s pretty much living in hell under the terms of her father’s controversial conservatorship and isn’t even allowed to get pregnant because of it and we’re all kind of shocked that she’s been living like this for so long and not really talked about it publicly, always professing that everything was OK.

However, this clip from a concert in July 2018 in Atlantic City seems to confirm that she was forced to perform regularly when she was unhealthy and unwell by her father. She’s live on stage when she complains about having a fever and how hot she is:

Dear @britneyspears ….I feel like we owe you an apology. We bought into the whole hype of BRITNEY the performer, without much consideration for how Britney Jean Spears, the person, was coping through each day. Looking back now, I remember you saying this in front of me… pic.twitter.com/I80ODPKPvq

It’s going to be really, really hot up here – I’m warning you.

I actually have a 102 fever right now.

OK so that doesn’t look that bad just on its own, but now that we all know the context of what Britney has been having to put up with under the stewardship of her father it takes on a whole different significance. Absolutely awful what that woman has had to put with over the years and I think we can all only hope that the judge finally frees her from this awful conservatorship at some point in the near future. #FreeBritney

For more of the same, check out everything that was said at Britney’s hearing yesterday. Absolutely jaw dropping stuff.