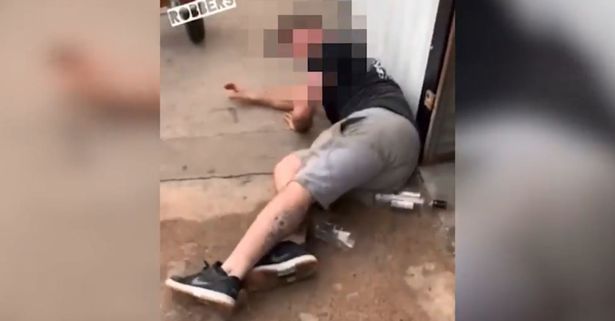 He gets extremely drunk.

Sometimes when you’ve finished a hard day of manual labour, there’s nothing you want to do more than head to the nearest pub and get on it and have a great time, forgetting all the backbreaking work that you’ve just been through. It’s pretty much a British tradition.

The guy in the video below couldn’t even wait to get to the pub after his shift though, instead deciding to get a bottle of Famous Grouse whisky and down that, followed by a bottle of vodka straight afterwards. Needless to say, the poor fellow is absolutely rat assed in about a minute and can’t even stand up.

British worker drinks 2 bottles of alcohol after work, gets extremly drunk from r/WTF

The video comes from a company called Tubular Access Scaffolding and was originally posted over a year ago. The man in question is yet to be identified, but 36 year old director Nigel Horlock has revealed that he’s been sent death threats because of it:

The impact it’s had has not been good. I’ve had death threats – people saying I should be killed.

The man in the video was a subcontractor who we hired for a week. He was taken to hospital, but later discharged himself and continued drinking – it wasn’t anything to do with Tubular Access Scaffolding.

We’ve lost work over it. I just want it to go away but [the drinker] keeps posting it. I had about 100 emails in a day when it was first published – and middle-of-the-night phone calls.

They were saying, ‘You’re bullying the lad and making him do stuff’. You don’t drink on jobs – we’re a professional company.

I mean I don’t think they’re really bullying the dude there are they? He seems pretty up for drinking everything, although he’s probably a little naive to think that it wouldn’t have any affect on him. Think everyone in the video acts fine to be honest, not sure why people are phoning Nigel up and having a go at him about it.

For more of the same, check out this Russian man downing three litres of vodka. Legend.