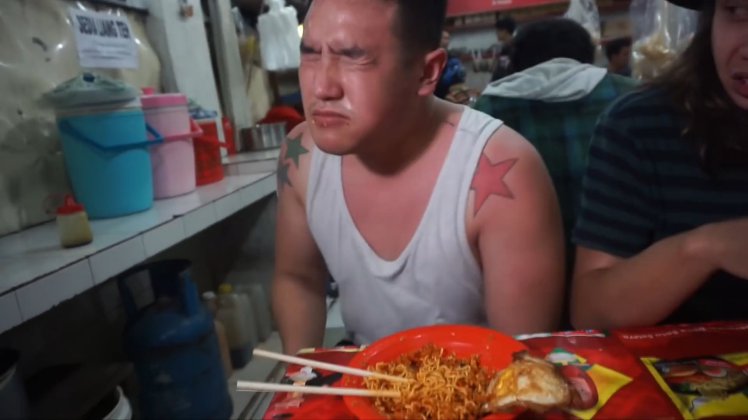 Too spicy for you mate?

A lot of people are obsessed with hot and spicy food now and determined to prove how hard they are by eating it. Normally this might just lead to someone puking or sweating a lot and drinking loads of water in an effort to cool down, but now someone has actually gone deaf from eating spicy food.

It happened over in Jakarta, Indonesia to British chef Ben Sumadiwiria who thought he could handle what the locals call ‘Death Noodles’. He couldn’t:

Ouch. That does not look fun at all and all Ben looks like is a complete pussy for thinking he could take it and then getting unceremoniously rinsed by them. Unlucky pal – here’s what he had to say following his experience:

This was definitely the hottest thing I’ve ever eaten. Within seconds of tasting them I was sweating and feeling sick.

Everybody who tried them threw up outside the drain. They’re known as ‘death noodles’ and some locals can even finish a whole plate, which is just crazy.

They’re definitely the hottest shit in the world – there’s 100 bird’s eye chilis in there which gives it a Scoville rating of 20 million, 4000 times hotter than Tabasco sauce.

You don’t really taste the noodles, it’s just pure heat with a tiny hint of noodles.

My lips were burning and I couldn’t feel anything. I’ve eaten wasabi and plenty of other hot food, and I’d take that any day over those noodles.

Wasabi? Come on mate – anyone can eat wasabi, but these are the motherfucking death noodles. Grow a pair and stop complaining because you really should have known what you were getting yourself into, especially being  chef. You’re basically an idiot but fair play for finishing them. You’ll be pleased to hear that his hearing came back as well – phew.

For more of the same (kinda), check out this moron putting a fire ant’s nest on his dick.