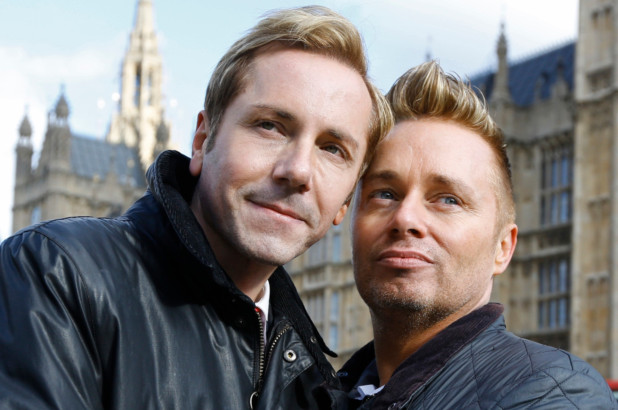 The well-documented relationship between Britain’s ‘first gay dads’ has sadly come to an end as one of the men banged and fell “in love” with his daughter’s boyfriend.

Tony and Barrie Drewitt-Barlow — who were England’s first same-sex couple to be named on a birth certificate as parents — have broken off their 32-year-relationship so Barrie, 50, can start a life with his daughter Saffron’s ex Scott Hutchinson, 25.

I’ve fallen in love with Scott and he has done the same.

I feel stupid at my age to have these feelings about someone other than Tony and half my age. But when you know something is right, it’s right. We have not made definite plans but I would like to marry Scott.

Amazingly, the whole family are living under one roof in a $7.5 million Florida mansion (Barrie is the CEO of British Surrogacy Centre of America – how do you think he had kids?).

Here’s a pic of the lot of them together:

And the new couple on their own:

That living arrangement has got to be weird for the daughter especially. I mean her ex-boyfriend is now basically her stepdad and she’s also eskimo brothers with her dad?

For the gay kid who beat the crap out of the school bully because he kept calling him the f-word, click HERE. Look out for that rainbow punch.