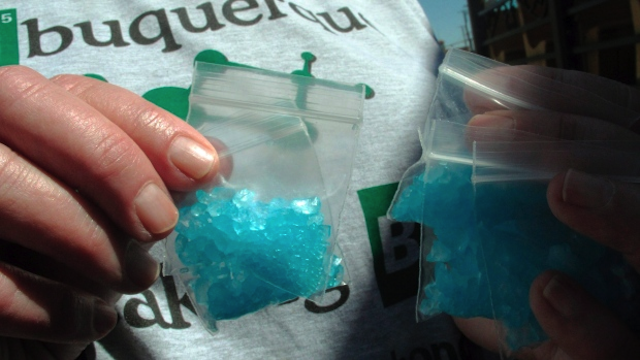 Heisenberg’s legendary blue meth has made it onto the streets of New Mexico, but it’s not exactly the real deal.

If you’ve ever watched Breaking Bad, then you know that the whole reason Walter White was able to get into the meth business was because he made the best meth out there due to his background as a chemistry teacher and because the purity was so high his turned the meth blue – giving it the imaginative name of ‘blue meth’.

Unfortunately (or perhaps fortunately if you’re a meth head looking for a stronger kick), blue meth has now actually hit the streets of New Mexico. According to Kevin Abar – a spokesman for the Department of Homeland Security in Albuquerque – the meth itself isn’t actually stronger than regular meth, it’s just tinted blue with chemicals to appeal to fans of the show who Abar says may find the blue meth ‘sexy’.

Maybe that’s the wrong choice of words, but I can see what he means by that. But if you want to do blue meth because you’re a fan of Breaking Bad then you’re a fucking idiot anyway, and you probably would have just ended up on meth anyway if you liked the show so much. Or maybe tried to start selling it and become a drug kingpin because copying everything you see in TV shows is something that people do all the time, especially if it’s completely unrealistic/dangerous/life threatening.

Although the blue meth isn’t stronger than the regular stuff and isn’t Heisenberg’s legendary percentage of purity, it is way more dangerous than actual meth due to the chemicals that it’s cut with to make it blue, and it’s making a lot of people even sicker than they would be if they were just taking regular meth. In short, it’s really dangerous and you shouldn’t do it. Kind of like regular meth but even more so.

If you’re from ABQ, then then blue meth is said to be increasing its circulation in the Four Corners and Farmington areas of the city, so if you’re trying to score meth maybe stay away from those parts of the city and the allure of the ‘sexy’ blue meth.

â˜› More Meth: Before And After Pictures Of Meth Addicts