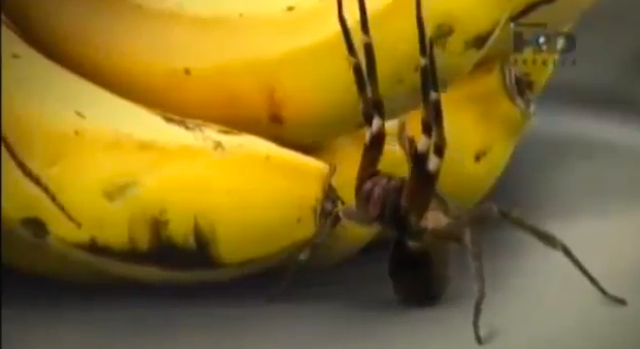 This is pretty much one of my worst nightmares ever come true.

29 year old Consi Taylor had a complete and utter nightmare in London whilst doing something as innocuous as eating a banana when a bunch of the world’s most poisonous spiders – known as the Brazilian wandering spider – burst out of it all over her kitchen. That just isn’t what you want to happen when you’re sitting down to enjoy some delicious fruit, is it?

Consi in her defence thought that it was just some mould on the banana, which is possible because we’ve all seen bananas that get a bit bruised and gross if they’ve been sitting around for a while. But upon closer inspection she was horrified to see that these white bits of mould were actually little eggs that were hatching on the table into spiders and then scurrying around the house. Eww.

Before she realised just how dangerous these spiders are – they’re known as the ‘most toxic’  in the world according to the Guinness Book Records – Consi tried to take them back to the Sainsbury’s where she had bought the bananas and was offered about £10 compensation for the incident, which probably wouldn’t have been enough even if they had just been regular spiders.

However, being pretty cautious about all this she sent a picture of the spiders to a local pest control specialist who warned her that she needed to get her and her family – husband Richard and two small children – out of their house as quickly as possible until it could be sufficiently fumigated to get rid of all those little critters. Sainsbury’s kindly decided to pay for the fumigation cops and the hotel that the family had to stay in whilst this was carried out. I’m not sure if they threw the original £10 offer in as well but I would have expected them to give the family a lot more considering how traumatic this whole ordeal must have been for them.

Consi herself has said that she’s now terrified to buy bananas and will probably never buy one again: ‘I hope I didn’t eat one of the spiders but I can’t be sure. I now have a phobia of buying bananas. We don’t know whether they’ve all gone.’ Sainsbury’s on the other hand haven’t been too apologetic about the whole incident, merely stating that they have ‘rigorous controls on imported products at all stages’ which probably sounds good on paper but not when something gets through the net and something like this happens.

If you’re buying bananas from Sainsbury’s any time make sure you give them a good once over before you pop them into your mouth.

You can check out a picture of the Brazilian wandering spider being found in a bunch of bananas below, although this one was filmed back in 2009 in America. Unfortunately there’s currently no video of this woman’s horrific encounter, although perhaps that’s a good thing.