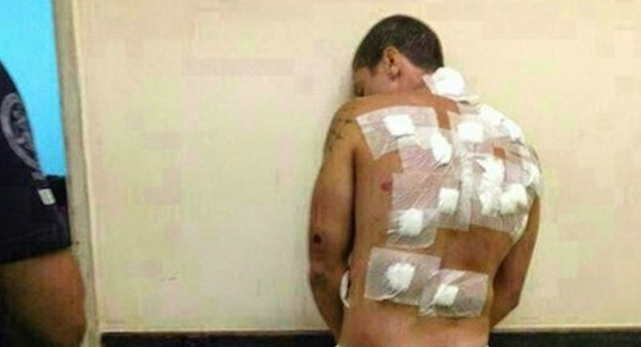 Is this a fair punishment for what this guy did!?

This is a weird one, and I’m not entirely sure which side I come down on in it because both sets of people involved in it are fucking disgusting and reprehensible in every sense of the world. Here’s what went down.

A Brazilian martial arts instructor named Daryell Dickson Meneses Xavier turned himself in to police admitting that he had raped, beaten and ultimately killed his one year old stepson. The infant had died from trauma to the head after spending two days in the hospital following his admission.

Following Xavier’s incarceration, other prisoners were completely shocked and appalled by his behaviour – as you would be – and decided to exact their own brand of justice on him. You can guess what happened next. 20 of them cornered him in the showers and fucked the shit out of his ass completely. Then, unbelievably, things got even worse.

Ouch is all you can say really. You can see a couple of pictures of the guy on the next page and whilst it’s not completely horrific, it isn’t the most pleasant of sights either.

The biggest question here though is whether or not Xavier deserved this. I mean obviously raping and killing a one year old kid is completely mind numbingly awful, but is it more or less mind numbingly awful than being consistently gang raped for the rest of your life by 20 people? I don’t know.

I guess that’s what prison is like though, and if you do the crime you’ve gotta do the time especially in Brazil. I saw that season of Prison Break when they were in a South American prison and that did not look good, and Prison Break was a completely pussy show by that point. I imagine the real thing is even worse, with some people saying that South American prisons are like Hell on Earth.

For Xavier it certainly is. You can only imagine what the prisoners might have done to him if he hadn’t admitted to his crime, or to someone like Ian Watkins if he had been incarcerated there. Grim.