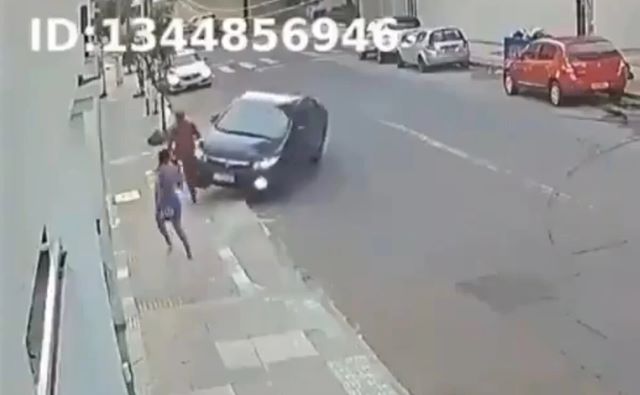 You do not want to get caught stealing a phone in Brazil.

The trouble with being a petty thief in places like Brazil is that you don’t just have to worry about the cops, but also about the general public spotting your crime and coming together to administer a brutal dose of vigilante justice.

Just ask this phone thief who was run over, fly-kicked, punched and stomped by a whole crew of good Samaritans moments after snatching a young lady’s phone:

Damn! How about the reaction time of that car driver? Didn’t hesitate for a single moment to wipe that guy out. Yeah OK he might’ve given himself a flat tyre in the process but I think we can all agree that anytime you get the chance to run over a thief who has just snatched a woman’s phone, you have to take it. Bravo, sir!

Just imagine if this was the way we dealt with things in the UK or America? Actually coming together to take action against a criminal instead of standing around filming in hopes of going viral. Why be the lame ass who’s standing on the pavement with his iPhone out when you can be the hero who fly-kicks a phone thief into oblivion? Although we also have to consider the fact that if this did happen in more ‘developed’ countries, anyone who laid a finger on that phone thief might find themselves in jail too.

Still, pretty refreshing to see a bad person make a bad decision and face immediate consequences for it. Go on, Brazil!

To watch a Brazilian nurse beat up an intruder who forced his way into her home while she was filming a twerk video, click HERE.