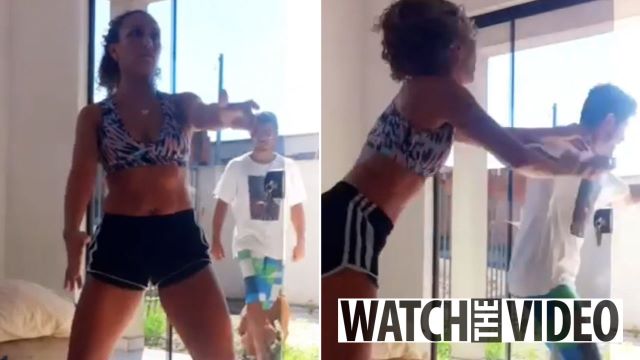 A badass Brazilian nurse who was getting her twerk on in the comfort of her own home was startled by some weirdo who randomly showed up behind her and entered the premises uninvited, leaving Angela Goncalves no choice but to unleash a torrent of punches and kicks to send the creep packing.

What a crazy video. It really seemed as though she knew him from her initial reaction, although apparently that was instinctually the plan:

I got scared and act naturally as if I knew him until he reacts with the intentions of grabbing me.

I guess there’s no real way of knowing how you’re going to react until you’re in that situation, but boy did Angela go from 0 – 100 real quick as soon as that creep put his hands on her. Guy really walked into the lady’s home and tried to grab her like it was the dancefloor in a nightclub or something.

Question is – what the hell was he up to exactly? At first I assumed he was a thief, but thieves target houses that they believe are empty, not the ones that have music blasting and people clearly dancing inside. Well whatever he was planning, it failed spectacularly. In fact, could be that he didn’t have a plan at all. Just thought he’d stroll into a complete stranger’s house and take it from there. Possibly the worst home invader the internet has ever seen.

P.S. Shout out the world’s most useless guard dog too, just sniffing the guy’s feet and not offering any warning or protection whatsoever. You had one job, buddy!

For the 85-year-old man who completely annihilated a burglar who tried to steal his model railway collection, click HERE.