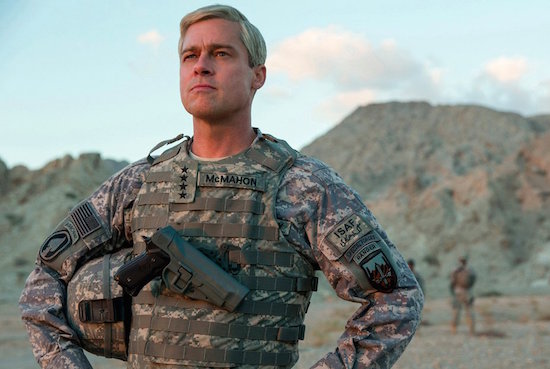 Loosely based on the real life story of General Stanley McChrystal.

It seems like I’ve talked about a new Netflix property that looks absolutely sick every day this week, and it looks as if they might see out its entirety the way they’re going as they just keep dropping awesome looking stuff all the time.

The latest in this series of releases is the trailer to a new Brad Pitt movie called ‘War Machine’. It’s loosely based on the story of General Stanley McChrystal, who jumped in to command the NATO forces in Afghanistan but found himself overwhelmed by the complexity of the job. Here’s the official blurb:

An absurdist war story for our times, writer-director David Michôd (Animal Kingdom) recreates a U.S. General’s roller-coaster rise and fall as part reality, part savage parody – raising the specter of just where the line between them lies today. His is an exploration of a born leader’s ultra-confident march right into the dark heart of folly. At the story’s core is Brad Pitt’s sly take on a successful, charismatic four-star general who leapt in like a rock star to command NATO forces in Afghanistan, only to be taken down by a journalist’s no-holds-barred exposé.

Yeah, that does look really stupid but should also be pretty entertaining. Michôd knows what he’s doing, the cast is great and the source material should be dumb enough already that they probably don’t even need to add too many jokes to make it a comedy. Pitt also looks as if he’s playing a role that he isn’t normally used to either which should be fairly entertaining.

Basically, Netflix look like they’ve smashed it once again. In case you missed it, check out the new Will Smith movie they have coming out this year too. Looks epic.