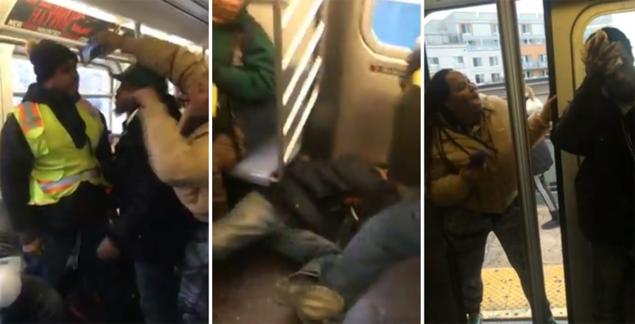 Don’t you just hate it when your girlfriend picks fights with random hench dudes in public?

As described by the NY Post who shared this footage earlier today:

An enraged subway rider attacked a man after the victim’s wife and the attacker got into a protracted argument and she spit at him. The incident happened on a northbound 5 train at 3:30 pm Wednesday. A bystander, who was one of several straphangers yelling at both the woman and the attacker during the entire event, caught it all on video. “I’m gonna fuck your nigger up,” the man screamed over and over again after pummelling the woman’s husband with a series of hard punches and kicks that left him on the floor of the train.

Girlfriends like this are the absolute worst. They’ve got no problem having a go at some hench dude who cuts into the queue or keeps talking out loud at the cinema. Hey babe who do you think is going to end up punched in the face at the end of all this? Here’s a hint – it’s not you. Please don’t pick fights with dudes who you know for a fact can beat the shit out of me because it’s going to end like this video every time. You want to start a fight with another girl? Be my guest. Some dude twice my size? No thank you.