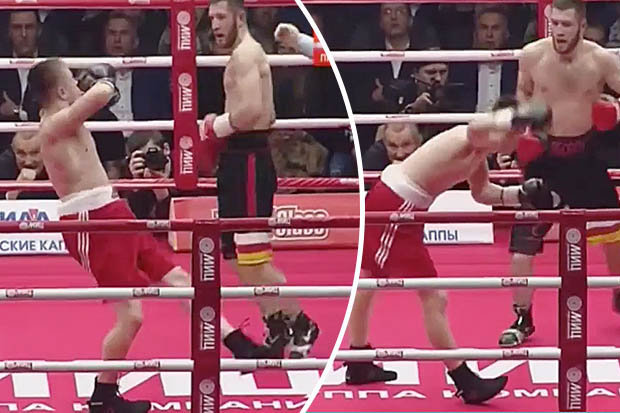 A resurfaced video shows the moment Russian boxer Georgi Chelokhsaev wins against Vladimir Myshev with a ruthless left hook that leaves him wobbling like jelly.

The knock out went down during the fourth round of their super-lightweight match. Myshev looked tired and exhausted and that’s exactly why Chelokhsaev took his chance and finished him with the knockout punch. The force of the blow knocked the fighter off balance, causing him to stumble about in the ring as if on ketamine before falling to the floor.

Amazingly, Myshev does make it back to his feet to continue the bout but his corner stops him just moments later to rescue their man from taking further damage.

He might’ve lost the fight, but hats off to Myshev for even attempting to carry on after that punch – that looked like a brutal blow.

For the time a boxer threw a punch so hard, it made his opponent projectile vomit, click HERE.