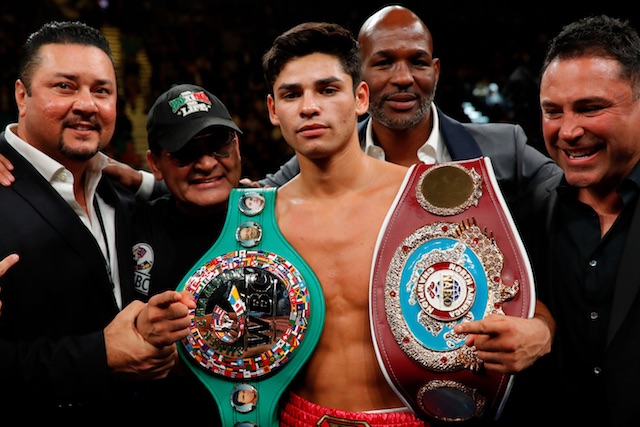 I’m not gonna lie, I have absolutely no idea who Ryan Garcia is but it’s always funny when you find a video of someone getting busted for cheating on their wife – obviously not for their wife – so that’s why I’m writing up this story.

Turns out 22 year old Ryan Garcia is perhaps even worse in this situation because he’s messing around on his pregnant fiancee here which is understandably a trash move when the woman is sitting at home looking after his unborn child whilst he’s out partying and getting some with a random Instagram model. Ryan was filmed making out with Malu Trevejo – apparently a big deal on Instagram – over the weekend in LA and not being very surreptitious about it:

i still can’t believe that ryan garcia and malu trevejo hooked up with each other- i really was simping for ryan.. pic.twitter.com/X9zDQqDEbr

Oops. Things went from bad to worse when his pregnant fiancee Drea Celina posted on social media saying that she was about to give birth in seven weeks and that he had told her that he had been training for a big fight.

Hot damn. Malu then moved to distance herself by uploading a video saying that he had no idea that Ryan was engaged and when she called him out about it he said that it’s because he and Drea were off and on. Oh dear.

TODAY IN “WHO COULD’VE SEEN THAT COMING?”: Malu Trevejo explains Ryan Garcia never told her that he was engaged before they went to dinner and kissed. She adds that when she called him today and asked him about it, he said he didn’t say anything because they’re “off and on.” pic.twitter.com/SKh5HTa1v2

What a mess! I can’t say I’m that bothered about it because I don’t know who anyone involved in it is or really care about them, but I can imagine the fallout will probably go on for a while and be fairly entertaining, so grab a pew and stay tuned!

For more of the same, check out this dude trying to slip $100 to his phone repair guy so his wife won’t see his call log list. Unlucky pal.