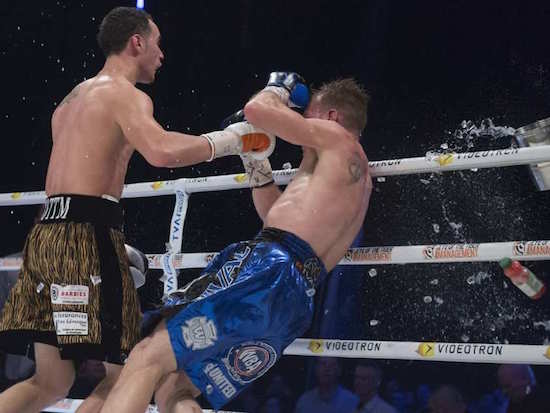 The thing about having live sporting events with a crowd is that it’s very easy for a crowd to get out of hand and for things to get a little bit rowdy, especially when the favourite in any event doesn’t end up winning.

The recent Stephen Butler vs Brandon Cook boxing match over in Canada is the perfect example of this. Both boxers were undefeated before the match and Butler was the resounding favourite. However Cook surprisingly managed to beat him in this fight, and the crowd and Butler were not happy about this development at all.

First of all Butler seemingly goes over to Cook to embrace him but then sort of half sucker punches him, before a guy manages to launch an ice bucket into the crowd and clock him in the head. Neither of the shots look particularly hard, but following a tough boxing match it’s not what you need at all, and he crumples into a heap on the floor:

Ouch – you got to admit that’s a damn good throw though.

Apparently there was a brawl in the crowd too following this, but I can’t see any evidence of that from the video. Cook, a man and a woman, as well as two employees of the Ball Centre in Montreal where the fight took place, were all taken to hospital following said brawl. They’re all doing OK now and police are investigating the fight too.

What a crazy night of live sport – just goes to show you never can be too careful. For more examples of brawls, here’s an absolutely disgusting one from a non league match. Man’s got battered.