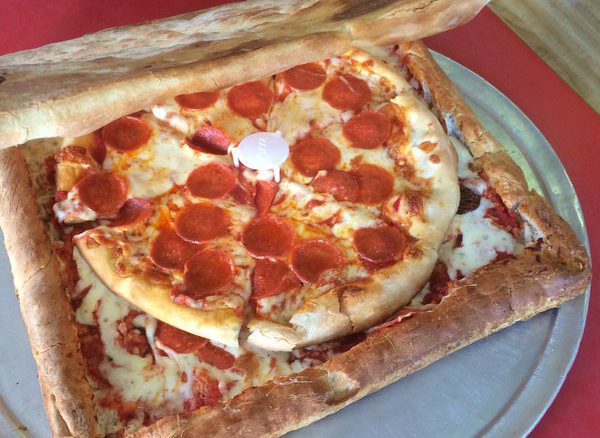 They’re have been a few revolutions in the way you receive your pizza in the past fews months – the pizza box that doubles as a projector for your iPhone and the one that turns into a bong for example – but I don’t think anyone could have prepared me for the pizza box made out of actual pizza. That’s some next level inception and I kinda like it.

Vinnie’s Pizzeria over in Brooklyn have come up with the idea and it looks absolutely delicious. Here’s the tweet:

Introducing The PIZZA BOX PIZZA! A pizza box made entirely out of pizza! No waste, 100% pizza and 100% delicious. pic.twitter.com/2KxxndlK4Z

As you can see, it’s being served on a plate and so it doesn’t look like they’ll actually be delivering it in their cars in a pizza box, but maybe they will who knows. Also, I’m not entirely sure what the top of the box would look like because if it had topping on it surely that would just fall off onto your regular pizza? That wouldn’t be so hot, but neither would a whole big square of pizza dough to polish off after you’ve eaten your pizza. Maybe if you had enough dipping sauce I suppose.

Still, you gotta try something like this once. If you’re in the area, let us know how it went. If you’re stuck in the UK, we’re still waiting to hear how the world’s most expensive pizza is too.