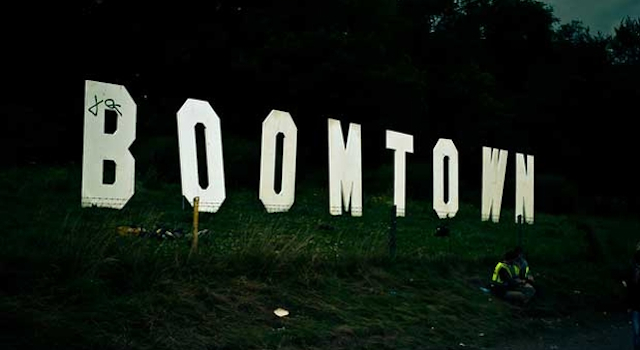 We went down to Boomtown festival this year and had an amazing time once again. Here’s what went down.

While a cloud of dust rose above the maze of clammy punters awaiting entrance into the weird and wonderful Town of Boom – also known as, Boomtown – the ‘pshht’ of opening cans set the tone for a weekend of bubbly naughtiness. As the majority avoided cardiac arrest on the walk through the larger than ever town-site, we were met by the sign posts to whichever District we would be flirting in this year. Feeling particularly seedy thanks to the afternoon heat, we approached the Downtown to erect our tents and get the weekend rolling even before the star studded line up of reggae MCs commanded us to.

We were housed alongside the grime and smog of Boomtown’s infamous Downtown. A block where Arcadia spat fire at the pedestrians, the Boombox pumped relentlessly into the night and the debauchery of the Dance Off embarrassed many throughout the day – the district lived up to its reputation as the duttiest of all wines in the area. From the hypnotic dubs of the street corners and alien sounds of Reeps One on the Arcadia stage, to the classic Jungle vibes brought by the notorious Mickey Finn’s Urban Shakedown, it was going off from the moment we let ourselves unleash a violent boogie in the beautiful mess of this Boomtown suburb.

â˜› Remember This Idiot: This Twat Tried To Fix Our Boomtown Fair Competition 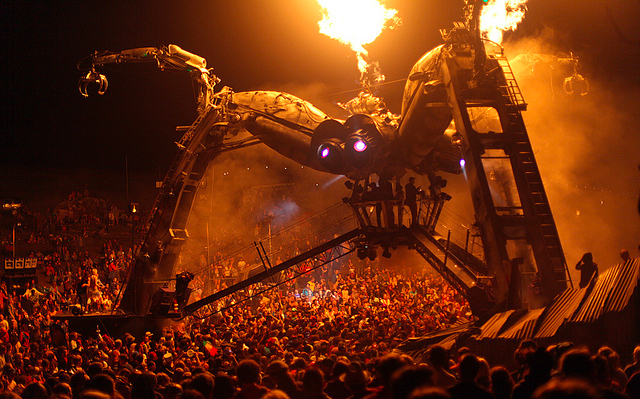 The sprawling campsites of Boomtown continued to spread over the land around, and the Downtown area’s nearest alternative could not have been more different. The peace and solace of the Hidden Woods next door plunged you into a completely different area and vibe. The sounds of Roots throughout the weekend marched on as punters dubskanked loyally, the sultry sands of the wood’s floor allowing us to imagine we were in some sort of Caribbean calypso. Boomtown seemed to have this ability to plunge you into these kind of trips…

Of course, that was not all. The sands of the Hidden Woods could be found by the Lion’s Den stage, where woods surrounding the Aztec ruins overlooking the biggest crowds of the weekend. Once again, reggae took centre stage as the sounds of Julian Marley’s Boom Draw invited the slutty, smoky vibes as the sun shone its brightest. The Iratin Steppaz / Channel 1 sound clash to follow was particularly sweet, and the stage seemed to lull us into this mystical trance for the hole weekend – whether we were in the woods, lulling on the sand to Collie Buddz, or being battered by the speakers during Richie Spice. It was a ridiculous stage, a crowd favourite, and equally impressive that people resisted the temptation to climb up top and skin up overlooking the dubbed out crowd. 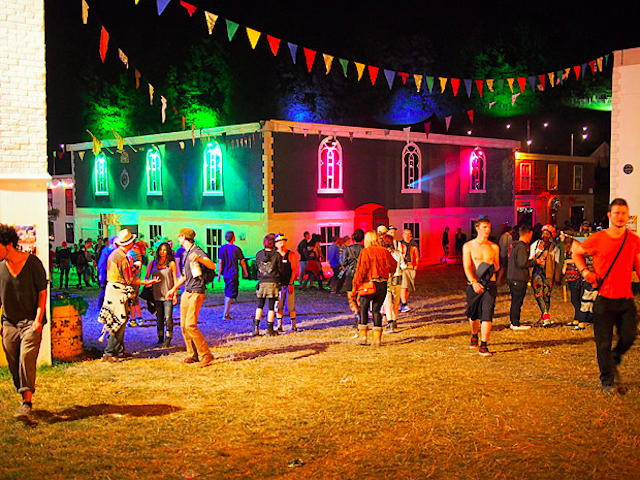 But the amount of madness within the town of Boom probably stopped any such plans. The traditional Wall of Death thrilled and shocked, as a man hurtled around the steeped circular walls at 30mph smoking a cigarette… I’ve never seen something so ridiculous. However the boggling entertainment continued elsewhere. We were led into a bizarre French scene comprised of puppetry and some of the oddest humour you will ever see – this was Boomtown though, everything seemed to go down here. From this multicultural mess one could hop on the town Bus (sadly, it was basic, being mainly made of cardboard and string) and pop into the many other districts there to be explored.

The psychedelic woods near the Old Town seemed a particular fan favourite. The relative darkness and blaring psy-trance luring us in for what seemed like 10 minutes, but was really 2 hours, as shapes were thrown from all angles and people forgot the real instruments of the festival for the manic tones of the shadowy forest. The Old Town stood near, where the Bank housed the sounds of swing and shook it up like a western bar scene. However nothing reminded us of the weird nature of this town than the rave grave – where the sound systems were enough to bring people back to life. Dancing corpses and sadistic priests ran free, as this grotesque zone continued to delight.

â˜› More Dancing At Boomtown: The Dance Off Crew 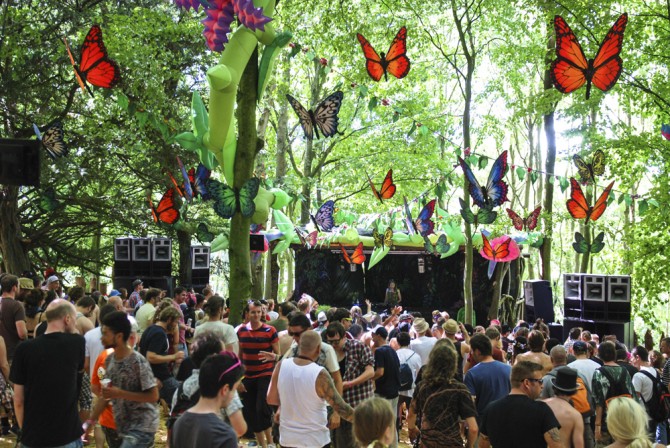 Something was desperately wrong in this town – but that’s why we loved it. It’s architects clearly knew what the crowd needed, and the Big Love Chapel summed this up, as one wife married her new man to the news that he had ‘shat himself in the campsite last night’. Romance indeed. Whether you were patrolling the Town Centre listening to the Skints; braving the fairground rides in your questionable state; or ‘avin it in the strictly old school Garage, er, Garage, you were having fun.

At Boomtown people seemed to really believe they were there. The imperfect artwork and shabby walls of Downtown contrasting with the posh Mayfair areas and creating a realistic city vibe. The sea of fancy dressed and finger wagging festival-goers dived head on into the festival’s vision – no one wanted to leave, and no one will leave. Boomtown is home now, see you next year.

Whilst we were at the festival we managed to catch up with our pals in Problem Child: