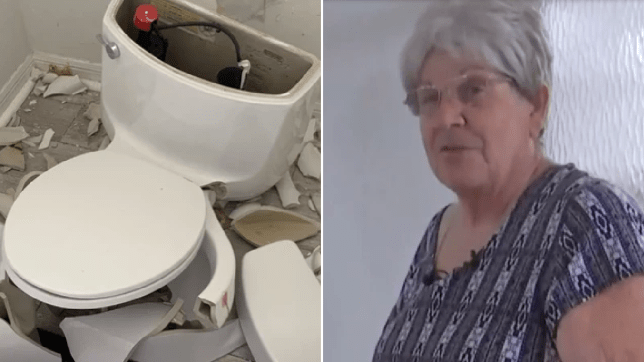 You generally think that once you’ve dropped the kids off at the pool and flushed the toilet that all your problems to do with your turds and farts and anything else that has come out of your ass are completely over.

Not the case though, as this woman named Marylou Ward from Port Charlotte in Florida unfortunately found out when her whole toilet system was set on fire after the methane gas from her farts in the septic tank of her toilet was set alight after a lightning bolt hit the house.  Take a second to think about what’s happened there because that really is an unfortunate set of events isn’t it?

Here’s what Marylou had to say about the explosion, which she said was the loudest noise she had ever heard:

We have nothing now.

We come in here and the toilet was laying on the floor.

We smelled smoke and I looked outside.

It was the smoke from the septic tank that was coming.

I’m just glad none of us were on the toilet.

I mean I guess that is the main thing but it’s kinda shitty that they lost their entire plumbing system because of this dumb combination of events. Apparently now her master bedroom is broken with a bunch of yard ornaments scattered around the garden, as well as a hole in the ground where the toilet once stood.

Hope she’s got another toilet in her house or is planning on getting it fixed soon because it could be a real issue quicktime if she doesn’t do something about it. Don’t want there to be piles of poop all over her house as well now do we?

For more methane, check out this fart that sparked a Spanish gang war. For real.