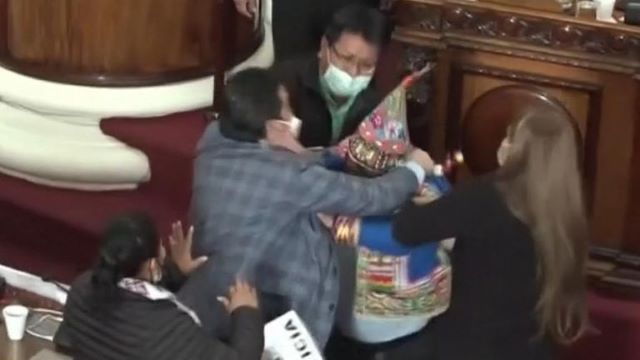 We’ve got a full-on brawl between politicians in Bolivia’s Plurinational Legislative Assembly this week, amid an intense row about the detention of Jeanine Áñez, who led the coup government that overthrew democratically elected President Evo Morales in 2019.

A fight has broken out in the Bolivian Parliament between the opposition politician Henry Romero and a member of the ruling socialist MAS party, Antonio Colque.

Brilliant. I just love how the bell dings at the start of the video as if to signal this is a real sanctioned fight. I know one of these politicians is wearing traditional Bolivian attire but there’s just something so funny about a guy in a colourful coat and elf hat trying to beat the shit of somebody. Unfortunately for him once the guy in normal clothes realised he was in a fight, it was game over for colourful coat dude.

The best part… he literally punched his mask off!

Fantastic. Again, I don’t know the ins and outs and complexities of the issues at hand and I don’t really care, all I know is that there’s one clear winner in this scrap and I guess that guy rules Bolivia now. Does that mean he gets to wear the coat too?

Can you imagine Boris Johnson and Keir Starmer settling their differences in this way? Would make things a lot more entertaining and efficient, that’s for sure. They could even sell it on PPV! Parliament Fights – let’s make it happen.

To watch another massive parliament brawl break out, this time in Uganda, click HERE.