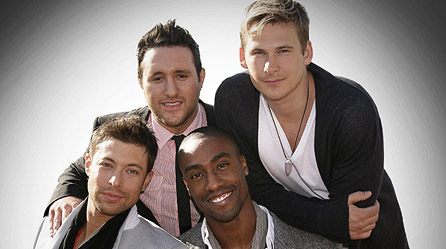 So I guess this news is about 2 weeks out of date by now – making it less ‘news’ and more ‘history’ – but no-one else has mentioned it as yet, so I took it upon myself to tell you that Britain has finally unveiled its song for the annual LOL-FEST that is the Eurovision Song contest. Ever since hearing the fever-inducing news that early noughties behemoths BLUE would be representing us this year (courtesy of Sick Chirpse), I’ve been on the edge of my seat waiting to hear what kind of tune the British song-writers would deem adequate to the task of beating the Republic of Ireland’s entry: the mighty JEDWARD, who: it would appear, were pretty much made for Eurovision. In fact I wouldn’t be surprised if they were the secret offspring of Terry Wogan and Sinead O’connor bred specifically in some deep underground Irish lab for the purpose of kicking Europe’s ASS at Eurovision before the world finally ends in 2012. SO, uh, anyway, the Blue song, yeh, uh here it is:

httpv://www.youtube.com/watch?v=mRU31ieUhJM&feature=player_embedded\
To be fair, if you put the utterly budget video aside for a moment, I don’t think its a bad song, considering its a pop-song written exclusively for a competition where all the nations of Europe sing against each other to see who’s the cheesiest for the right to host this absurd competition and bring all the craziest people of the world to their country the following year. And just in case that last sentence makes it seem like I don’t like Eurovision, I absolutely do: I think its fantastic. That’s why I’m pretty pumped that we’ve got a kind of catchy song (complete with sick Soulja Boy style ‘OOOOH’s in the chorus), sung by some people who can actually kind of sing and perform for once rather than the drivel that we’ve had every single year since the glory days of Gina G (I still cannot comprehend how that song didn’t win). Now don’t get me wrong, I do realise there’s no way we’re going to win thanks to some absurd countries who bring political agenda into a light hearted song competition, but at least this year we MIGHT actually be able to legitimately say we were robbed, rather than throwing baseless accusations around when all we had were beyond terrible songs sung by beyond terrible ‘singers’. Then again, if anyone can fvck it up…I’d bet BLUE can. I mean, they’re not exactly A1 are they?