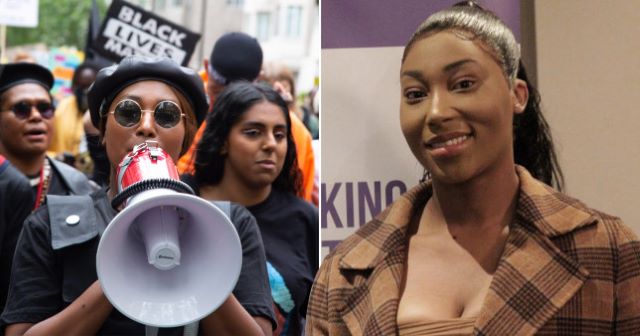 The BLM UK leader was shot in the head at a Peckham house party at 3am.

You’ve probably heard by now that controversial BLM activist Sasha Johnson was shot in the head at a Peckham house party in the early hours of Sunday morning, and remains in critical condition in hospital.

The mum-of-three had faced ‘numerous’ death threats owing to her anti-racism work (involving some personal views that not every anti-racist may agree with). Here are a couple of her highlights:

“I promise you, I don’t threaten. Come out there-let’s live through the promise”

BLM leader Sasha Johnson was controversial not just for her political activism, but for her confrontations with others as well. The woman was severely injured in a shooting. pic.twitter.com/p3fnFXkc9d

So it would appear she had a few enemies out there, though according to the Met Police there had been ‘no credible threats’ on her life before the incident at the south London house party.

Naturally, Twitter is full of speculation as to who shot Sasha Johnson, given her ties to BLM and the fact she had also started up her own political party – the Taking The Initiative Party (TTIP). Here are some of the ideas floating about:

How do we know British intelligence didn’t do it. Smacks of Malcolm X and MLK

Malcolm x, Martin Luther in America and Sasha Johnson in the UK. All shot for wanting the improvement of black people kept in concentration camps, kidnapped,robbed, raped we cannot live together in peace give us reparations and allow us to leave Babylon.

PEOPLE we have been subjected to witness an assassination attempt on a Sasha Johnson .The authorities say it’s not politically motivated.From what I surmise is MI6 is playing it down. I understand she’s in critical condition with a gun shot to the head.Hear Our Prays Almighty

Now they have taken shooting our activist international. Sasha Johnson a Black Lives Matter Activist in the UK is the victim of an assassination plot. They say she was shot in the head and is fighting for her life..🙏🏿🙏🏿🙏🏿

BLM activist Sasha Johnson shot in London. Given that this group was well educated, and very organized and vocal, they may have been seen by the British government as a threat. And if the goverment had anything to do with this, don’t expect the case to be solved any time soon.

They really shot Sasha Johnson in the head? Wow! This is the kinda of thing you hear happening in America. The government must have been involved….https://t.co/e7twb2jtIB

Another false flag as the government extends Covid laws to November.

Firstly – anyone with a shred of decency will be hoping that Sasha Johnson pulls through, no matter what you think of her politics. At the end of the day she’s a young mother of three who is entitled to her views and wants to create a better world for young black people, even if her methods sound questionable.

The comparisons to MLK and Malcolm X and the idea she posed enough of a threat to the ‘establishment’ to be assassinated does seem a bit far-fetched though. Is there a chance that British intelligence/MI6/the UK government was involved? Well it’s not completely out of the question, but it’s unlikely. I hope it’s not too crazy for me to say that a Peckham house party at 3am is exactly the sort of place you might expect bullets to start flying, given it has some of the highest gun crime rates in the country. It could even be that Sasha Johnson was hit by a stray bullet rather than being the gunman’s target?

Hopefully the facts will be out soon and whoever is responsible brought to justice. Most importantly, let’s hope Sasha pulls off a miraculous recovery. Seems like a real fighter, regardless of what you may think of her.

To watch a bunch of fights break out at the ‘All Lives Matter’ protest in California the other week, click HERE. Oh dear.