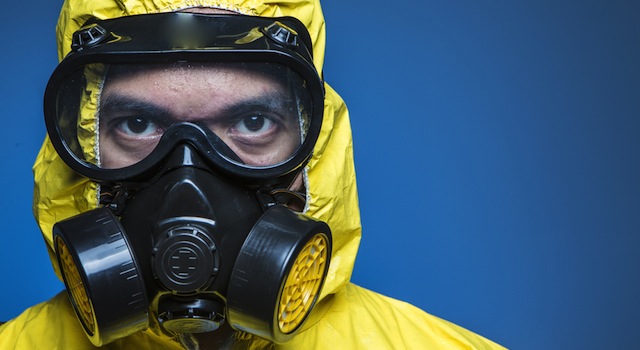 Is this the real live ‘Borne Ebola’?

A shadowy individual or group of individuals has publicly threatened the Czech Republic with an outbreak of Ebola unless they pay up millions of Euros of Bitcoins. It sounds like the plot of a film that might be called Bourne Ebola: sinister weapons being held by sinister people in a sinister plot to spread disease to an entire country, except unfortunately it’s not a movie script. They’re not the first people to have tried to turn a profit from the Ebola crisis though. Yesterday the country’s main commercial TV channel – TN Nova – published an email where terrorists claim to have “biological material” from a Liberian Ebola patient which they are eager to share with the masses, unless they get paid. The country’s deputy police chief Zdenek Laube told reporters…

An unknown perpetrator or perpetrators are blackmailing this state, threatening to spread the Ebola virus… From the very beginning these culprits have been seeking to spread panic, which is their primary goal.

The blackmailers are asking for a total of 1 million Euros, spread over three payments. Although detail of the group’s modus operandi has not been made public, these criminals are clearly not some small concern. The interior ministry, without giving away and of the specifics said:

The culprit or culprits are using very sophisticated communication methods.

As it stands, without human interference, the Ebola virus (which has killed about 5,000 people already in Africa) would have a hard time reaching the Czech Republic, but the government are taking this threat very seriously indeed. Chief public health officer Vladimir Valenta has tried to put people’s minds at rest:

Obtaining the virus, its transport, efficiently spreading it in a way other than contact with an ill person or his or her fluids is not too realistic.

That’s probably only a slight relief for the nervous populous of the Czech Republic. Ebola is not the sort of thing you want to joke about, like that guy that thought it would be funny to say he had the disease whilst on a plane. Pillock. Ebola is already a monster without being helped along by greedy criminals. Let’s hope this one’s a hoax.