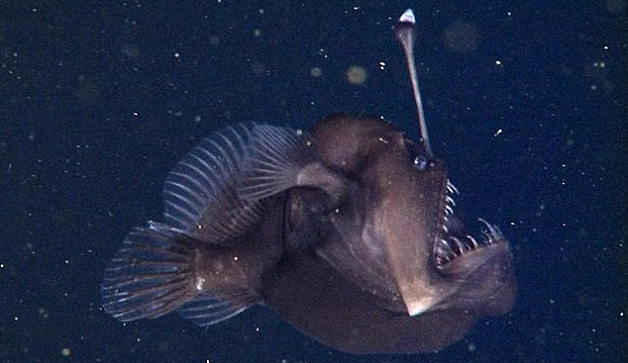 Scientists are practically fapping over this footage.

Scientists are practically wetting themselves over the fact that they’ve managed to capture the first ever recorded footage of a live black seadevil anglerfish. The creature was spotted miles down in an ocean trench in Monterey Bay in California.

A live version of the uglyass motherfucker has eluded scientists for years as they’ve only managed to find carcasses so far, despite the rascal being featured in Finding Nemo. It was discovered by a routine remote controlled called Doc Ricketts that regularly explores the area.

Anglers have a remarkable apparatus on their heads: a fishing pole, with a luminous lure at the tip, which they use to attract their prey. In the darkness of deep water, they flash the light to attract prey and draw them near the angler’s mouth. When a fish or a squid swims up, it is quickly inhaled by the angler’s huge mouth and trapped by its long, sharp teeth.

As if that isn’t weird and freaky enough wait until you hear about their mating habits:

Males don’t come with the fishing pole attachment and their sole purpose seems to be to mate with females. The male bites into the body of the female and their tissues fuse. The male’s body degenerates until it’s a lump of tissue surrounding testicles and the female will then carry the male around for the rest of her life, and collect more along the way.

The sea is a messed up place, and this isn’t even the tip of the iceberg of all the messed up creatures you can find down there.