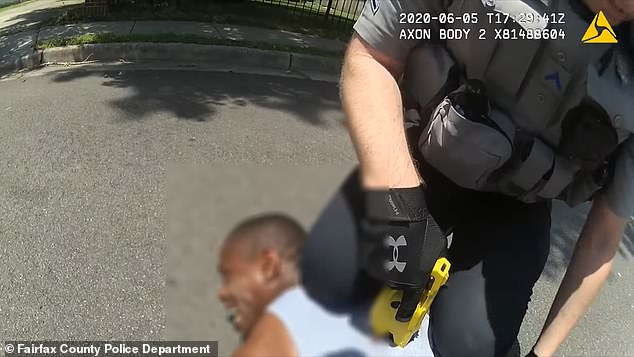 You might think that the Black Lives Matter movement would have made some progress over the last week or so of protests, but then you see a video like the one below and realise that it’s gonna take a whole lot longer for racism to be stomped out – if it ever will be.

The video comes from the body cam of Fairfax County Police Department (Virginia) officer Tyler Timberlake and features him tasering a black man and then kneeling on his neck and tasering him again, whilst the black man screams that he can’t breathe. It took place on June 5th, not even 10 days after George Floyd was killed by police officers in Minneapolis in a similar incident that has sparked global protest.

The black man does seem to be incoherent and troubled at the beginning of the clip – he’s babbling about needing oxygen and wanting to go to the hospital – and then refuses the offer of an ambulance from a paramedic, but it doesn’t seem like he was a threat or that Timberlake needed to do anything that he subsequently did.

You can watch the footage below but be warned it is kind of distressing:

Fucking hell. Why the hell did he come over there and do that? Sure they guy was being a bit annoying but I think they could have easily sorted it out without resorting to those measures? That bit where he’s tasing the back of his neck is horrific.

I literally can’t believe that some dumb white cop would end do something like that given the current climate that we’re facing in the world, but I guess this is more illustrative of the problem we’re facing than anything else I’ve seen posted yet. I guess this corrupt sense of power and privilege is just ingrained in white American cops at this point and even a worldwide protest movement isn’t enough to change their actions.

Thankfully, at least the Fairfax County Police Department seems to have listened to what’s been going on in the last couple of weeks, as they announced that they had arrest Timberlake and charged him with three counts of assault and battery, possibly leading to a 36 month prison sentence if convicted. Here’s what Chief Colonel Edwin C. Roessler Jr. said:

The body-worn camera video that you observe, and I am releasing, shows a Fairfax County police officer deploying force in violation of our use of force policies, and they are criminal acts which violate our oath of office, and they ignore the sanctity of human life.

The video also erodes the public’s trust of police officers not only through Fairfax County, but throughout this world.

The victim in this video was treated at a local hospital and released. I thank God through my prayers that he is alive and resting at home with his family.

I’ve personally reached out to the victim and spoke to his mother to express my disgust with my officer’s unacceptable, criminal actions, and assured her justice will be served.

I suppose that’s something positive to come from this at least. I fear that it’s going to take a long long time before this kind if behaviour is stamped out for good though. Ten days since George Floyd and stuff like this is happening FFS.

For more of the same, check out this supercut of all the police brutality going on in the United States right now. Damn.