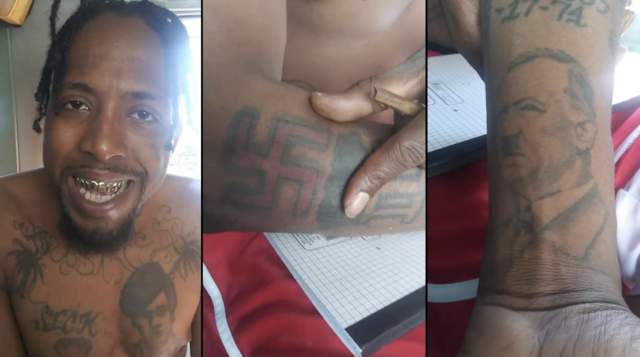 Remember that hilarious Chappelle Show episode that featured a blind white supremacist who didn’t know that he was black?

Well I think we’ve just stumbled upon the real life version, except this dude has 20/20 vision and is 100% aware of the fact he is black. He’s also so entrenched in his beliefs that he’s got himself a bunch of Swastika and Hitler tattoos. WTF?

Mind = blown. This guy reckons the real enemy of black people is other black people, and so his solution is to… kill more black people? He’s really trying to make it make sense but it’s a struggle, let’s be honest. I mean I’m all for people being able to think for themselves and arrive at their own conclusions but I’m not sure starting a Black Nazi movement is doing anyone any favours.

To watch a white BLM activist tell a black doctor “I’m more black than you on the inside”, click HERE. Bit awkward.