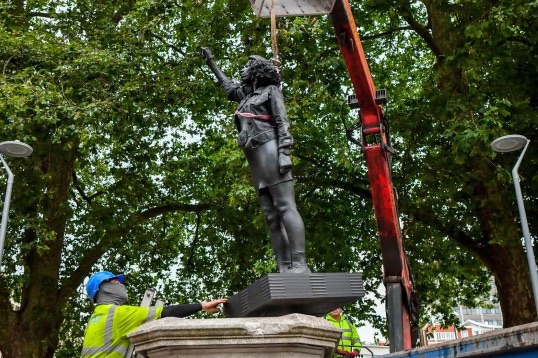 There was a whole bunch of controversy and a whole bunch of comments yesterday when a statue of a Black Lives Matter protester appeared in Bristol on the plinth where the statue of Edward Colston had resided for so many years before its forced removal. Things got heated pretty quickly.

The Mayor of Bristol last night tweeted that because the statue didn’t receive planning permission before it was erected that it would have to be removed and it seems like the council have wasted no time in enforcing their decision as workers were pictured dismantling the sculpture at 5:20am this morning. It has now been moved to the city’s museum where it’s been made available to artist Marc Quinn to pick up or may just end up being displayed there permanently instead.

Here’s some footage of its removal:

Well, I’m sure a bunch of people are going to be really happy that it was removed so quickly and a bunch of people are probably going to be a little ticked off about the efficiency with which it happened. To be honest, I’m kinda surprised that they managed to sort it out so quickly, but I suppose they were wary that leaving it around so long might lead to more vandalism or violent protests that they probably didn’t want to have to sort out.

Or are we as a nation over our brief flirtation with tearing down and destroying statues? Nobody has really mentioned it for a couple of weeks so maybe it’s finished now? About as fleeting as everything else that’s happened this year.

Anyway, it’s probably the right move on all parts to get rid of it and let the people of Bristol decide what will be placed in that spot instead. I guess it’s served its purpose in keeping the conversation moving forward as well, so everyone comes out of this with something. Kinda.

For more of the same, check out what happened when Tommy Robinson met up with a Black Lives Matter protester. Obviously it didn’t end well.