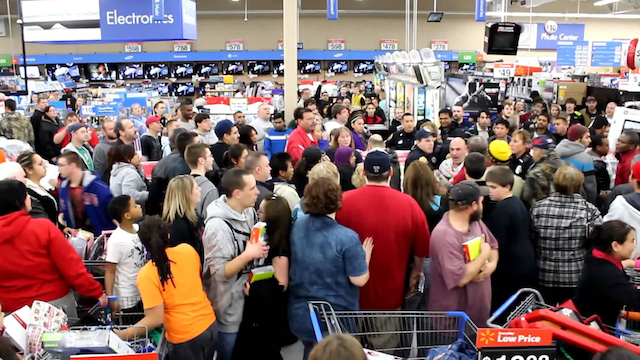 It’s that time of year again, and the tweets, vines and YouTube clips have already begun to roll in.

Black Friday thankfully isn’t a thing in England yet, but in America it’s huge and ridiculous and primal and because of that we write about it every year.

In case you don’t know what Black Friday is, here’s a quick explanation: in the US, the day after Thanksgiving is known as Black Friday because every store in the country has huge sales. As everyone in America loves a bargain – especially in the run up to Christmas – thousands and thousands of people descend upon Walmart and all of the crappy stores over there and go absolutely insane trying to get those items they need and this regularly leads to violence and all kinds of crazy shit going on. The most high profile incident was when a Walmart employee was shockingly trampled to death on Black Friday 2008.

Due to the popularity of Black Friday, many major chains over in America like Walmart, Macy’s, Target and Best Buy actually open their stores early on Thanksgiving itself to satisfy demand/make more money and Americans being Americans they flock to the stores instead of hanging around with their families drinking beer, watching football and eating turkey, which is what you’re supposed to do on Thanksgiving. As such, there are already a bunch of tweets, vines and YouTube videos on the internet of all the crazy shit that’s going down on Black Friday and the best way to find these is probably to use the hashtag #WalmartFights which depressingly is trending in America right now because there is so much of this crap going on.

Here are some of the best ones we’ve been able to find. It depresses me that people act like this just to save a bit of money because the opportunity cost of behaving like this is worth so much more.

More stories over the page: