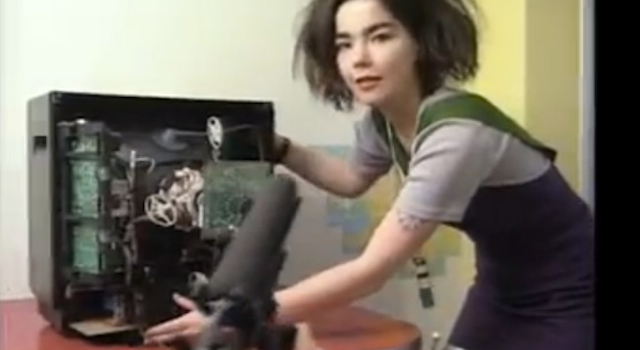 For some unknown reason, Bjork offers a typically crazy and mesmeric explanation as to how television actually works.

This is about six or seven years old but hadn’t really received any coverage until someone dug it up a few days ago which is surprising because it really is a completely bizarre piece of footage, although I guess that’s what you normally get when you’re dealing with Bjork because she is pretty much batshit insane.

So, the story goes that Bjork had a few days off from tour/writing songs/whatever it is she does and was sitting at home in Iceland and watching a lot of TV. So much TV in fact that she decided that she just had to know how a TV actually worked. Following some research (or maybe just some time spent doing some creative writing, judging by the complete lack of knowledge displayed in this clip), someone thought it would be a good idea to stick a microphone in front of her face and have her explain it to the whole of Iceland/the world.

And what they got was this, which is akin to how a small child is probably told how the television works. Granted, Bjork does her best impression of a small child throughout most of her life (despite probably being really highly intelligent) but this is just crazy. She talks about the circuit board being a kind of city a la Tron, and then goes on to talk about two separate theories from and Icelandic poet and an Icelandic book on the mechanics of television – one which terrified her and one which subsequently reassured her.

There isn’t really any point in trying to describe this anymore though, it’s just something you have to say. Interestingly, the dots that she decide aren’t true actually are the correct explanation of television, whereas the Icelandic book she read and has decided to accept as truth sounds like it probably was a children’s book. Oh Bjork.