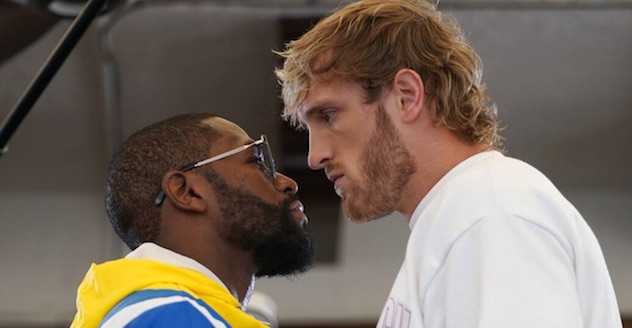 It’s not even a real boxing match?

I wouldn’t say that the whole world is super pumped about the Logan Paul and Floyd Mayweather fight tomorrow night, but I think everyone is watching on with a vague interest and so most people will be interested in hearing about the bizarre rules for the bout that have just been announced.

As it’s an exhibition match the rules differ from your standard boxing match with the biggest variance coming with the fact that there aren’t going to be any judges for the fight, meaning that nobody will be scoring it so there won’t be an official victor. However, knockouts are going to be allowed which means that Floyd could knock out Logan Paul but still technically wouldn’t be declared the winner of the bout.

Here are the rest of the rules:

Obviously people are ragging on this for not really being a contest, but I’m not really sure what people were thinking when it’s always been billed as an exhibition match? The same thing happened when Mike Tyson fought Roy Jones and when Floyd fought some Japanese guy a couple of years ago and annihilated him so hard that the quit after three rounds.

Hopefully the same thing happens with Logan Paul because honestly, however funny you think it might be for Logan Paul to KO Mayweather there’s just absolutely no way that’s going to happen. It’s pretty much some guy off the street going against the best boxer of all time. Bang bang see you later basically.

For more of the same, here’s Logan Paul saying that he’s going to retire as the best boxer of all time after knocking out Floyd. That’s going to age well.