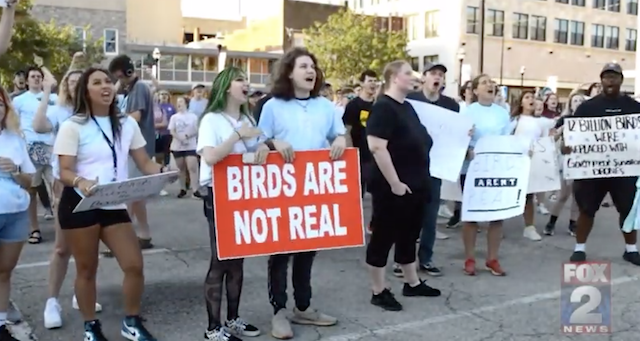 All bird have been replaced with security drones.

It’s been well documented that once a long time ago, conspiracy theories were kind of cool but ever since the advent of the internet and YouTube they’re actually pretty dangerous because anyone can just make something up and get a bunch of nutjobs to believe them.

The ‘Birds Aren’t Real’ conspiracy theory isn’t one of these though as it was actually created to make fun of people who got lost down the wormhole and refuse to compromise on their ridiculous beliefs, arguing that all birds in the US have been killed and replaced with security drones by the government. There’s literally no way to prove that this is real or not either as you would literally have to kill every bird in the country to disprove it, so it’s the perfect foil for all the crazy people out there.

However, whilst it started as a bit of a meme or whatever, it’s now getting a bit more serious as the movement held a rally in Springfield, Missouri over the weekend and an overwhelming amount of people decided to show up. Here’s the footage:

Hmm. Not really sure if this is a joke any more if people are actually taking the time out to go to rallies and protest this stuff? Surely that doesn’t really make them any better than the people they’re making fun of if they’re also choosing to spend their time this way, even if they don’t actually believe what they’re saying most of the time? Not sure how to react to that one.

The whole situation might be saveable though as it turns out that this footage is being used for a documentary about the fake movement that’s being shot over the summer. Again, I’m not really sure if that makes these actions better or worse, but I guess I’ll reserve judgment until the finished documentary finally comes out.

For more of the same, check out CNN interviewing a bunch of QAnon conspiracy theorists. To be fair to the ‘Birds Aren’t Real’ guys, it’s pretty hard to figure out which set is real and which isn’t.